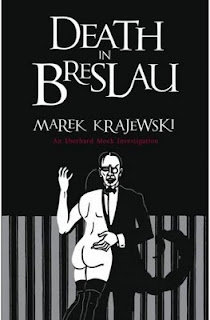 The first of Marek Krajewski’s Eberhard Mock novels, Death in Breslau, appears to begin at the end, both with the novel itself and the series (the English translation, by Danusia Stok, was published in 2008 by Quercus). The novel begins after World War II in an asylum where inmate Herbert Anwaldt is screaming every time he sees a cockroach. The scene then shifts to a rail car in Breslau (the German name for the now Polish city of Wroclaw in 1933, where lie the bodies of two women, their torsos slashed open and crawling with scorpions. Criminal Director Mock is in charge of the puzzling investigation, but the book is not really a police procedural and Mock is not a conventional detective. He’s more interested in protecting his career, beset by the rise of and conflicts among the Nazis and by the secrets of his own past.

Mock also has a stock of information on other people’s secrets, and uses that archive to control people at all levels of society, from brothels to secret policemen to the nobility. He allows himself to posthumously convict the Nazis’ candidate for the perpetrator of the murder, and then is faced with finding the real killer, by means of his new assistant, Anwaldt, brought in from Berlin to conduct the investigation in secret.

Ultimately the story spans centuries, from the crusades to the 1950s, from Turkey to the U.S., and along the way there is much decadence, long-pending revenge, political intrigue, and violent retribution. Anwaldt is actually more at the center of it all than Mock, and he is battered and tortured by all sides, moving the story more by blundering into difficulties than making discoveries. At every stage there is cruelty, corruption, and prostitution. Mock himself has a highly refined and somewhat comic sexual habit that is catered to by a brothel under his protection.

According to the information that’s available regarding the next two books in the series, Krajewski is going backward in time, toward the earlier stages of Mock’s career—certainly a unique approach to a crime series—but then this series is unique in a number of ways, suggesting the heights of Expressionism and the depths of human nature. Death on Breslau is a self-contained novel, carrying forward the story of Mock and Anwaldt to a conclusion that wraps up the strange story in a way that would seem to prevent a sequel: so it will be interesting to see how the “prequels” already translated and future novels in the series that may arrive in English develop Mock’s career and the crime scene in Breslau. Death in Breslau on its own is a bizarre and self contained story that will be of interest to anyone looking for a different kind of crime novel (it reminded me just a bit of an even more unconventional book, Péter Lengyel’s Cobblestone, set in early 20th century Hungary, but Krajewski’s story is more accessible).

Glenn I reviewed the even more decadent prequel End of the World in Breslau here http://bit.ly/aWRje8 and interviewed the author.
I am looking forward to the pre prequel Phantoms in Breslau which I have on my TBR shelf.
Cheers Norman

Norman: Thanks for the links to your very interesting interview with Krajewski, which I had missed when it was originally posted (I'm looking for copies of Mock #2 and #3).

I will agree to Glenn. I also want to thank you for sharing those links. It brought me to a very informative site. I want to congratulate you for that interview.