The Neapolitan Streak, by Timothy Holme 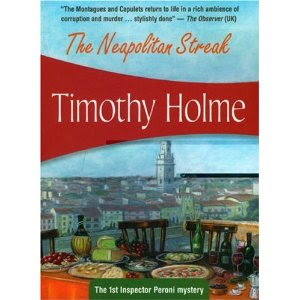 Timothy Holme's series about Italian detective Achille Peroni isn't a candidate for a "forgotten friday" book, though the first in the series, The Neapolitan Streak, was published in 1980: it's back in print, and is listed in the excellent resource on Italian "gialli" or crime fiction (by and about Italy) at italian-mysteries.com. But The Neapolitan Streak is first of all, for a reader in the present day, a reminder of how much excellent Italian crime writing is accessible in English now. We might have, in 1980, needed to settle for an OK novel, set in Italy, by a knowledgeable non-Italian (but Italian resident, as Holme was). Now we have better options, though the Peroni stories have their charms.

My impulse to read the first in the Peroni series came from discovering the city in which it is set: Verona, a city that I visited some years ago, and which I found to my surprise that I liked a lot. I was expecting the tourist scene there, but not the native charms of the place (the Roman ruins, still used for concerts--as the Neapolitan Streak shows, the Adige river raging through town, the pleasant ambiance of the old city). I hadn't discovered crime novels set there, previously, and was disappointed that Holme felt obliged to concentrate his plot on Shakespeare instead of the less kitschy aspects. (Holme also references Dante briefly, once explicitly and once in the names of two star-crossed characters, Paolo and Francesca, and more emphasis on an Italian literary precedent might have made a better book, for me).

The Neapolitan Streak does involve much contemporary historical material, including the Red Brigades and the rise of neo-fascist nationalism in the north of Italy. All of that would have been stronger elements of the plot if Romeo and Juliet hadn't intruded so much. It's not badly written, but at times it's a bit cute (Peroni's niece and nephew have a penchant for solving his crimes for him, and he constantly is referred to as "The Valentino of the Italian police": a comic element, since Peroni is a very vain man, but still irritating after the fifth or sixth use of the epithet.

Astute mystery readers will have figured out the final twist before it arrives, and will also perhaps be a bit irritated that another twist (which readers will also have anticipated) turns on Peroni's sense of a psychic aura within a place, rather than a more concrete clue. Peroni, in fact, dashes back and forth a lot, without really accomplishing much, as the plot goes on in the background. The central and very disfunctional families (both aristocratic, but at opposite ends of the Italian political spectrum) in the story suggest a story that Michael Dibdin might have done more with.

It's probably overkill for me to complain so much about Holme's book--it's an adequate mystery, especially for the era in which it was written. It simply lacks the authenticity of contemporary crime writing by Italians, or the full humanity of the characters in Magdalen Nabb's or Donna Leon's books, to mention two other non-Italian, Italian-resident authors that have been more succesful at evoking Italian cities. For writing about Verona, Tim Parks is very good, but not really a crime novelist (despite the crimes and criminals in his novels, and perhaps because his non-fiction better evokes Italy than his fiction).

If there are dissenting opinions about Holme, please give them--and if anyone knows of other crime novels set in Verona, please let us know about them, too. The cover image I've pasted in here is from the current edition, though the version I read was the original U.S. edition (I couldn't find a jpg of that cover). The new photo-based cover is better than the illustration on the old one anyway.
Posted by Glenn Harper at 10:01 AM

I sure wish I had time to get to more of these books. I am reading Peter Temple just now. Awfully good. His style, if not the plot or characters, reminds me of Bruen.