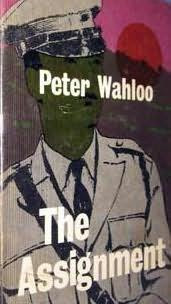 The last installment of my "forgotten" series about the solo novels of Per Wahlöö, all of which are out of print in the English translations by Joan Tate (and several of which are attributed, in the original English editions, to "Peter Wahlöö).

The Assignment presents Manuel Ortega, a minor diplomat from an unnamed Latin American country that sounds like Argentina, who is at the beginning posted to his country’s Swedish embassy. Ortega is presented with a dilemma, in the form of an offer to take over the mission of a murdered General, who had been sent to the south of the home country to mediate between landowners (backed by the army) and rebels purporting to represent the landless poor. If he takes the job, it would advance his career, but both sides in the region have sworn to kill him. The situation in which he finds himself, when he takes the job, is depressingly familiar from news stories of Latin America today, in broad outline and even in some of the details (as well as sharing some common ground with Mario Vargas Llosa’s two crime novels, reviewed here some time ago). He is assigned a secretary, Danica Fernández, who travels with him from Europe and who proves to be one of the most interesting female characters in all of Wahlöö’s work (including the Beck books).

In that and other respects (the arc of the plot, the dialogue, the setting) The Assignment is the most fully realized novel among Wahlöö’s solo efforts. Ortega is determined but frightened, inspired by his predecessor and frustrated by the roadblocks put in his way by the landowners’ militia and others. The heat, inertia, fear, and frustration are palpable, and the threat and opportunity (for Ortega and the country) are delicately balanced in a way that pulls the reader forward. Though it has elements of the thriller genre, the story meanders rather than races; though there’s plenty of crime in it, the worst offenders are not individuals but groups (local and national); so it’s a genre-bending book, something like Graham Greene but more political, and like Vargas-Llosa but less literary in style. When the climax of the plot comes, the cynical reader may see it coming (and may not see how some of the characters failed to see it coming), since it depends on the trust with which one may endow one’s political leaders. Nevertheless, there is a final twist based on character that will leave the reader re-playing the whole story in the light of the ending.

By the way, two of the current paperback, Swedish editions of Wahlöö's solo novels, The Steel Spring and The Lorry (see the covers in previous posts here) are plot spoilers--things that I would not mention in a review. They both make good covers, though--and perhaps the books are so well known in Sweden that the plots won't be a surprise to anyone who picks up the "stamp-licking" or the "fish with guns" covers...
Posted by Glenn Harper at 6:32 AM