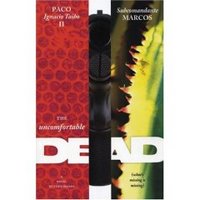 I read several of Paco Ignacio Taibo's earlier crime novels (featuring the sometime detective Hector Belascoaran Shayne) some years ago and then lost interest. Taibo's detective stories aren't so much "noir" as satirical and magic-realist. The author is using the detective form to comment on politics and contemporary life in Mexico and beyond. But I was curious about his most recent crime story since he co-wrote it in alternating chapters with a real-life revolutionary, Subcomandante Marcos of the Zapatistas still fighting in the Chiapas region of Mexico. Marcos's chapters are suprisingly comic (as well as tendentious and political, more what you would expect). Taibo's chapters are as comic as we might expect, but also political and critical. Both halves are "metafiction," drawing in authors and characters from beyond the novel's world--particularly both Spanish writer Manual Vazquez Montalban and his Barcelona detective Pepe Carvalho (Vazquez Montalban, also a poltical novelist using the crime genre satirically, died recently and The Uncomfortable Dead is in part an obituary or hommage). As metafiction, magic realism, politics, and satire, this "novel by four hands" is not that satisfactory as noir fiction, but its politics are actually very much in line with noir: the neo-liberal bad guys of The Uncomfortable Dead are the same as the evil developers of Chinatown and numerous noir novels and films. The novel ends not with a victory over evil but with a partial revenge against the evil that the authors see as permeating society as a whole. If a couple of bad guys are removed from action, it's only a drop in the ocean of evil. Belascoaran turns from murdering one bad guy to playing head games (or subversion, perhaps) with numerous unidentified "Moraleses", Morales being the protean bad guy or guys of this book. I can't say I'm motivated to go back and catch up with the other tales of Belascoaran (though in spite of its tendentiousness I enjoyed this book), but I am motivated to go back to the novels of Vazquez Montalban (who also inspired the Montalbano novels set in Sicily)--more on that series later.
Posted by Glenn Harper at 6:25 PM 6 comments: 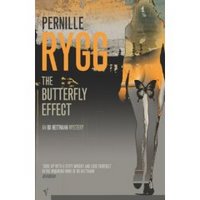 While waiting for several new releases of European noir in translation and a new Qiu Xiaolong novel about Shanghai, I went back to reread a Norwegian noir novel called The Butterfly Effect, by Pernille Rygg. I wanted to see whether it might be worth seeking out the second of Rygg's novels about sort-of private detective Igi Heitmann, and couldn't remember the first one all that one (other than that it had some passing resemblance to Smilla's Sense of Snow, a novel I didn't care much for). The Butterfly Effect actually has a VERY superficial resemblance to Smilla (a clinical/scientific setting for part of the book, a young female central character, the Scandinavian setting). Rygg's Igi Heitmann, though, is a believable character rather than a magic-realist cypher. Not that Igi has your everyday problems, unless you're a failed scientist whose detective father was just killed, whose first client apparently committed suicide, and whose husband is flagrantly gay. Igi goes up against the power structures of the psychiatric establishment, the police force that crushed her father's professional hopes, and the financial power of the developers raping the city of Oslo (according to Rygg). More Chinatown than Smylla, in other words. But at every stage, the narrative is low key, Igi is three-dimensionally human, and the story is tragic but believable. I've sent for a copy of the second Igi book, The Golden Section. Meanwhile, upcoming reviews here include The Uncomfortable Dead (co-written by Paco Ignacio Taibo II and Subcomandante Marcos, the spokesman for the Zapatista revolutionaries in Chiapas, Mexico), the aforementioned Qiu Xiaolong novel, a couple of Irish police procedurals, and new translations of noir fiction by Åsa Larsson, Helene Tursten, and some other surprises.
Posted by Glenn Harper at 6:09 PM 3 comments: 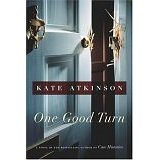 I guess one reason I didn't connect with the Rebus novel (by Ian Rankin) that I was reading last week was that I was simultaneously (and coincidentally) reading another novel about Edinburgh, Kate Atkinson's One Good Turn, a sequel of sorts to her earlier Case Histories. One Good Turn is an amalgam of a literary novel and a crime novel--there are repeated references to Matryoshka dolls in the book, setting up the notion that the intertwined stories in the book are nested like the dolls. But in fact, the plot is more like a snake eating its tail, a looping of twined narratives whose interrelationships only become obvious at the very end. It's as if a bunch of characters from literary and popular novels (Maeve Binchy comes to mind, or maybe Alice McDermott) find themselves plopped down in Edinburgh amid a series of violent acts growing from the road rage incident at the beginning of the book. With a good crime novel (or a good novel) there can be a sense of elation at the end, an emotional release with the completion of the circle or the resolution of the story. Though Atkinson doesn't quite wrap everything up in a neat package, she does deliver that kind of literary satisfaction--without stenting on the crime story, the noir elements, or the considerable humor with which her story is laced. One Good Turn is a big step forward from Case Histories: more complex, more coherent (once you get to the end of the book), and more satisfying--plus the humor is more overt, inducing not just smiles but laughter. And One Good Turn is also a step up from the average crime novel (without condescending to the genre). Atkinson shows us why reading about crime is so enjoyable: we're reading about ourselves at our limits--the limit reached when our actions and desires are taken to their ultimate conclusions.
Posted by Glenn Harper at 7:04 PM No comments:

Having trouble with Ian Rankin again 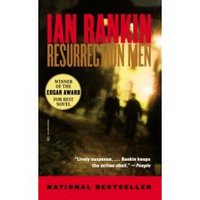 Can somebody help me, regarding Ian Rankin's novels? I repeatedly see blurbs for his books that describe them as "noir" or dark thrillers in any case. But I'm currently reading Resurrection Men, to see if I like Rankin's books any better than I did early on in his career--but I don't. Am I reading the wrong ones? Do I have false expectations? I've seen a bit of the 2 different BBC series about Detective John Rebus (two very different actors in the part, the most recent far the more accurate about the character), and they're OK. In fact, the novels read like a TV movie. Plenty of to and fro, but not much insight or emotional investment--I don't really care about the characters or what happens to them, nor about the investigation (I like police procedurals, when they're well done, but the Rebus books hardly seem to be about procedure--Rebus is more often relying on his "connected" informants than doing anything on his own. I originally had a hard time with Rankin because I was reading Peter Turnbull at the same time--and his Glasgow was a lot more interesting to me than Rankin's Edinburgh. Turnbull is more interested in ordinary people--Rankin is always getting involved with the top brass and the big gangsters. Turnbull's background as a social worker coming out, perhaps. But Turnbull's reputation seems to have faltered and Rankin just keeps going and going. So help me out--am I just wrong? Is there any point in my finishing Resurrection Men?
Posted by Glenn Harper at 10:34 AM 3 comments: