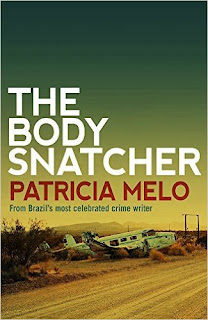 Patrícia Melo took the title of her recent book The Body Snatcher from Robert Louis Stevenson, but the plot is more like Jim Thompson. It sounds like pure noir: the narrator comes upon a crashed plane in the Paraguay River, with a kilo of cocaine and the pilot's body in it. He takes the coke and the pilot's watch, and from there the story set in a remote small town develops with a dark inevitability. He takes a job as a driver with the dead man's family and schemes to reveal the body's whereabouts to them (for a ransom), finds a distributor for the drugs, gets involved with his brother's girlfriend as well as a woman who works in the police morgue, and so on. Through it all, his voice is mostly matter-of-fact (except for some radio signals from his conscience). The book is short and fast, moving from one body to another, to threats from police and the dead pilot's family, and on to a conclusion that is distinctively inconclusive. Melo's take on noir is more philosophical than Thompson, though her narrator's voice is not that different from one of Thompson's first person characters. In Melo's work the crime story is less heated, even in its hottest moments, sharing a calm, somewhat distanced tone that she shares with some of the best European crime fiction (Jean-Pierre Manchette, for example). The inherent melodrama of classic noir is muted (unlike recent neo-noir such as the novels of Alan Guthrie, for example), as if at some level the narrator is reflecting upon the story rather than immersed in its violence. One approach isn't better than the other, but Melo's world, dark as it is, has a melancholy but almost optimistic tone quite different from the darkest and most pessimistic end of "hard-boiled" writing. Here characters, having suffered and struggled, have a final, tentative peace, something like the garden at the end of Candide, but with full knowledge of the violent world just beyond.

Posted by Glenn Harper at 7:26 AM No comments: