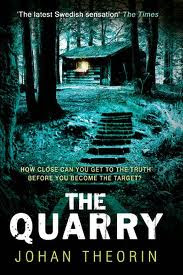 Theorin is one of the least conventional of all the translated crime writers, and although his books are certainly not everyone's cup of tea (being probably as far from that Tattoo series as it's possible for two series in the same genre to be), his distinctive writing deserves close attention. Some reviewers have expressed some disappointment in The Quarry, given the high expectations that Theorin's first two novels created. I found it to be a valid continuation of the series, with a bit less tense a tone overall, and with a less intense presence of both nature and the supernatural. It's a further development of his style, though, and unfailingly interesting.
Posted by Glenn Harper at 4:33 PM 2 comments:

Headhunters, published recently by Vintage Crime/Black Lizard in Don Bartlett's translation, isn't a Harry Hole book and is in fact quite different from that famous series. First, it's fairly short (and the Hole books are real doorstops). Second, the main character is a somewhat unreliable narrator named Roger Brown (he's Norwegian, but his father was English). Roger is a corporate headhunter (though other kinds of headhunters do crop up) and he's very impressed with himself and his record of getting businesses to hire his candidates (in fact, his only shortcoming, in his eyes, is that he is indeed short, by Norwegian standards).

Roger has the perfect job and the perfect wife (the only fly in the ointment being that he has refused her request that they have a child). His reason is that he doesn't want to share her with anyone, not even his own child (and the flaw in that reasoning comes back to bite him). She runs an art gallery, and during a private viewing for a new show she introduces Roger to the perfect candidate for a job he (and several other headhunter agencies) is trying to fill.

So far so good--but warning: spoilers ahead. I hate the blurbs on the backs of paperbacks, because they frequently (and in this case) give away what would have been, for an un-forewarned reader, a pleasant discovery in the story. So my recommendation is: Don't read the back of the paperback, don't read the blurb on Amazon or elsewhere. Come to the book as unprejudiced as possible, to best enjoy the twists and turns (of which there are many). Before going on, I should only warn prospective readers that there is some disgusting stuff in the book, not so much violence (of which there is some, but less than in the Hole books), and more scatology of various sorts (disgusting aspects of human bodies).

So: on to the story. Roger has a hobby. He gets his clients to tell him, during interviews, what sort of art they own, and if he finds what he hears desirable, he steals it. His partner in crime works for an alarm agency frequently used by Roger's clients, and he arranges for his partner to turn off the alarms and cameras at convenient times. But Harry's day job, his night job, and his marriage all come clashing together and create a mess that it doesn't seem like he can crawl out of (a bit of the mess is telegraphed in the prologue to the book, in which Roger and several others are trapped in a wrecked car, upside down in the woods).

Setting aside the disgusting parts, Headhunters is very cleverly plotted and a fun read. Roger is not a nice person, but as a narrator he's good company, and he withhholds just enough information to allow the reader some surprises (only a very alert reader will catch some of them in advance). So for Harry Hole fans and others who haven't discovered Harry or don't fancy him, Headhunters is highly recommended. There's supposed to be a movie coming out, but so much of the book is in Roger's head, it's hard to imagine what might be preserved of the pleasures of the story (leaving only the action, including the nasty bits).
Posted by Glenn Harper at 1:44 PM 6 comments:

An Irish Solution, a crime novel by Cormac Millar (pseudonym of Cormac Ó Cuilleanáin, a translator and a professor at Trinity College Dublin) was published by Penguin in 2005, and is little acknowledged among the current generation of Irish crime novels and novelists. Millar, who is the son of the late Irish author Eilís Dillon, frustrates all expectations with An Irish Solution: it's impossible to talk about the book without giving something away. Even the pitch made by the publisher, that it's about Seamus Joyce, newly appointed head of a new Irish Drug Enforcement Agency (iDEA) is misleading. And it seems to be the beginning of a crime fiction series, but that isn't quite true either.

Millar manages to constantly twist the plot away from cliche and into surprise, right up to the ending. At the beginning, a reader may think he/she is reading one sort of book, only to discover after a few chapters that it's really another sort of book, centered upon different characters than at first seemed central to the story. I kept trying to find comparisons with other recent Irish crime writing, but the closest I could come would be a mash-up of Alan Glynn's Winterland and M.S. Power's Children of the North trilogy (though Millar's book is more complicated and more cynical than the former and less mystical than the latter, and also without the latter's focus on Ulster and the Troubles).

Seamus Joyce is indeed newly appointed as head of the iDEA, but he's a bureaucrat, not a policeman. The police under his nominal command are into a great many things that he doesn't know about. Also featured are a pair of schoolgirls moonlighting in a pub, a hapless former schoolteacher, a few drug dealers, a senior nun, an international Institute of vague principles, and Seamus's hospitalized wife (and we can't be confident even in the stability of this last-mentioned character with relation to Seamus and others).

The book is often quite funny, in both turns of phrase and twists of plot. It's also quite enjoyable, once you leave your expectations at the door. Allow yourself some time to get into the book and you'll see whatI mean. There's a sort of sequel that I'm trying to get hold of now, and if it's half as good it will be well worth the trouble
Posted by Glenn Harper at 1:30 PM 1 comment: 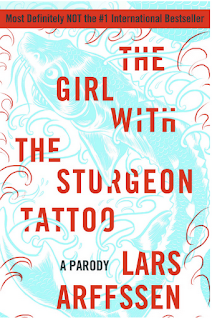 Has anyone run across The Girl With The Sturgeon Tattoo, by Lars Arffson? Published by St. Martin's Griffin in the U.S., it features hacker Lizzy Salamander and blogger Mikael Blomberg. I suppose it was inevitable (and purportedly it's pretty funny). Anyone seen it yet? It includes references to a new novel called The Vices, by American author Lawrence Douglas, whose image bears a striking resemblance to the photo of Lars Arffsen on the Sturgeon Tattoo...
Posted by Glenn Harper at 1:41 PM 1 comment: