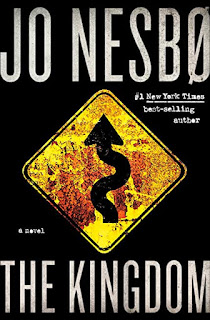 A quick review of three recent. books, all of which have a lot of music in them, but two of them have rock music as a major theme. Jo Nesbø's The Kingdom has a lot of music in it, being referred to or played in the background of the main story, but it's more of a matter of texture fot ehis book, rather than a. main theme. The Kingdom is not one of the Harry Hole books, it's a stand-alone about a pair of brothers who have endured a lot of abuse and tragedy. One has gone to America to escape amd make his fortune, the other stays on the famil's "kingdom," a farmstead (not a working farm) on the outskirts of a small Norwegian town. The prodical son's return, with a scheme for the development of the town and an American wife, kicks off a series of memories about the past (mostly unpleasant, sometimes grisly) and a series of events in the present (arson, murder, assault), with the two threads coming together in unpredictable ways. There are twists that you may expect, and yet sometimes when you think you have something figured out, Nesbø turns them around into something else. It's an intriguing story about love, sex, ambition, regret, and above all else family. 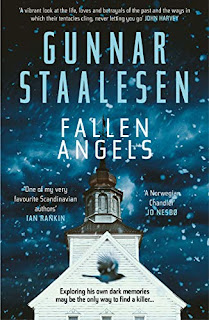 Staalesen's running character in his long-running detective series is Varg Veum, an untypical detective (his backgtound is in social work) often involved in cases featuring children. In Fallen Angels, though, we go back to Veum's own past, in memories and connections set in motion by the funeral of a school friend. We learn a lot about Veum, but even more about the local music scene of the '60s, in the detective's youth, when soe of his friends were in a regionally succeful band. The story leads us to the bandmembers in the present day and into an elaborate revenge. plot, along wiht a glimpse of the music scene of present-day Bergen. The pacing of Fallen Angels is different from the typical Veum story (and different from the average crime novel), delving into the character's youth before showing (or inferring) the murders that will show up about halfway into the book. From there, the pace picks up and we are back in crime fiction territory, in a moving story that involves the dark side of families, even evidently happy ones. 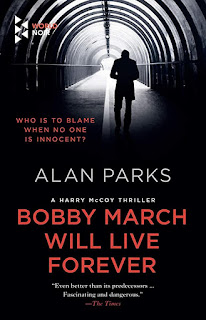 Bobby March will Live Forever is the third Harry McCoy book by Alan Parks, and here, too, a musician's past, mostly regional, success is the backstory that punctuates the contemporary tale (of gangters, murder, rape, and general mayhem that readers of Parks's previous novels will surely expect to see. Parks's portrayal of the Glasgow of the recent past is gritty and evocative, and his cops and gangsters are credible and complex. The interspersed music plot seems to be mostly an unrelated portrait of the trials and pitfalls of success and near-success in rock and roll's classic period (Bobby March, the guitarist who gives the book its title, once played with the Rolling Stones in a recording session, along with his participation in an almost-succesful band and his release of less-than-succesful solo recordings). The music plot does circle around to find its link to the main plot of the story, in more of a metaphorical than a literal way, in an unexpected solution to the event that kicks off the whole novel: McCoy's discovery of the body (and possible murder) of March in a Glasgow hotel. The story is propulsive, even in its digressions (and the digression about the world of rock is compelling), and develops in unexpected shifts (sometimes a victim is not so clearly a victim, for instance) and changes of direction that will keep a reader on their toes.

Posted by Glenn Harper at 2:44 PM No comments: