The Standardization of Demoralization Procedures by Jennifer Hofmann 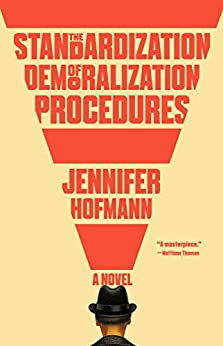 Jennifer Hofmann's new book is in a way a spy novel, but more accurately a novel about a domestic spying agency: The Stasi of East Germany, just hefore the fall of the Wall. The main character, Bernd Zeiger, is the author of the agency's manual for the Standardization of Deoralization Procedures, made up of guidelines for both interrogation of prisoners and the subjugation of the population in general. He is more a bureaucrat than a spy or an evil genius, and now he's at the end of his career (and of his tether). A fellow officer asks him to find his missing son, and points out that despite the secret police's vast structure of surveillance, there is a small number of citizens (including the daughter) who have disappeared without a trace (not defected, drowned in the river, or shot trying to escape over the Wall). Zeiger discovers that a young woman he has been looking for (Lara, a waitress he befriended who has not shown up for work lately) is also on the list. Zeiger begins to search for Lara rather than the missing daughter, and along the way he searches his memory and we discover many strange things about Zeiger, Lara, and a mysterious scientist who (maybe) knows something about teleportation (knowledge that brings him to the unfortunate attention of the Stasi). Shifting among these characters and the deteriorating social situation of the end of state conrol in East Berlin, the reader is kept off balance through a series of stories and revelations and a final escape (of a sort) that gives the sometimes comic, sometimes grim story a quality of fable or allegory. Hofmann holds the reader's attention throughout, and the story, while not at all a conventional spy story or detective story, remains fascinating.