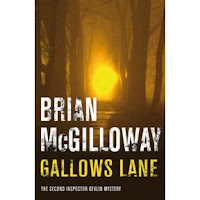 The second novel in the "Inspector Benedict Devlin" series has just been released. As with Borderlands, the first in the series, the style is understated in a way that paradoxically emphasizes the horror and emotion of the crimes and their aftermath. McGilloway's characters are not "hard-boiled" in the venerable noir tradition, they are instead struggling with the consequences of their contact with death and violence. Devlin is concerned about the effect his work is having on his family, though the family members are themselves barely sketched in. More completely drawn, and also conflicted about her job, is Devlin's partner at work, Caroline, as well as a few other cops. The murders are as lurid as in Borderlands, though there is more variety in the deaths here. There's also plenty of misdirection in the plot, which is not straightforward in terms of either story or police work. But the novel is carefully constructed, emphasizing Devlin's mistakes rather than his competence, and the ensuing self-doubts (just as he's up for a promotion that he's not sure he wants). There is an interesting, aggressive hostility between Devlin and one of his colleagues that keeps the police aspects of the book lively. Some of these threads of conflict and self-doubt promise much for a sequel, but Gallows Lane is itself a satisfying story on many levels. The book's complicated group of police, the female detective as partner, and the very strong sense of place echo a faraway detective series, the "peninsula" novels of Garry Disher, from Australia. But McGilloway is a more terse and poetic writer, compressing a great deal of event and emotion into a small space. Among the very accomplished group of new Irish crime writers, McGilloway ranks very high in his ability to evoke a particular milieu, to populate it with interesting and believable characters, and to structure his stories around meaningful (if sometimes horrifying) metaphors.
Posted by Glenn Harper at 6:15 PM No comments: 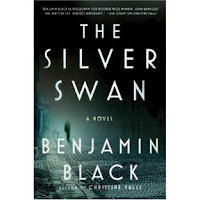 Like the first "Benjamin Black" novel by John Banville (Christine Falls), The Silver Swan is beautifully written, and is fully realized in its details. The characters are interesting and believable, the setting meticulously rendered, and the language evocative. But where Christine Falls had, if anything, too much plot, The Silver Swan doesn't have quite enough. Not to say that nothing happens: there are plenty of incidents along the way as Quirke, the curious pathologist in Dublin's post-World War II days, follows a thread revealed when a college friend asks him not to perform an autopsy on the friend's wife, apparently drowned, probably a suicide. But the incidents don't quite cohere into a story. First, there are some aspects of the plot that are difficult to believe: Not only the many coincidences required to involve practically Quirke's whole family in the story, but also specific plot points--beginning with that autopsy, which Quirke performs secretly, without informing the husband. I'm no expert, but it seems that an autopsy would, be a bit difficult to conceal from a family member, and in any case, the ease with which Quirke's deception succeeds is never explained. There is also a lot of very lurid material here, but all of it joyless. And the key figure in that part of the book, a Viennese-Indian guru of sorts, remains so opaque that his motivations are difficult to grasp. Black-Banville also departs from his hero's point of view so often that we hardly know what Quirke has discovered, or even what he knows of the "true" events at the end of the book. Black-Banville's narrator is more godlike than is usual in the best crime novels, which frequently depend on the limitation of point of view to draw the reader into the police procedure, the detective's investigation, or whatever thread leads through the maze of motivations and events. Though the ending of the book does include surprises, we know a bit too much as we go along for us to bother too much about where we are going to end up, especially given the tawdriness of much of the story. I was reminded of Graham Greene's early "entertainments," particularly by one of the most oddly engaging characters, the self-styled "spiv" Leslie Swan, a slimeball of the first order. His victims are perhaps less innocent than some of those in those early Greene books, and the moral less clear. Like those books, too, Black-Banville's is mostly atmosphere, something that Banville is, of course, known for in his mainstream novels, and the ambience is quite engaging and interesting. But, for me, the atmosphere is not quite enough to hold together a story whose various elements are linked by strands of coincedence, but are at the same time never quite cohere into a whole story.
Posted by Glenn Harper at 6:12 PM 2 comments: 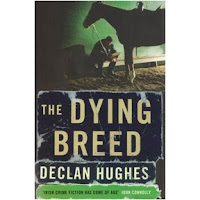 The third Ed Loy novel by Declan Hughes continues to explore the wealthy and middle class families of Dublin, but with a somewhat broader social eye as well: the horsey set, from owners and trainers through jockeys and hangers on, is the primary focus of the crime and the novel, but public housing estates and crimes usually associated with such settings also appear. The title of the book depends on your location: In the U.S. it's The Price of Blood, continuing the "blood" series of Hughes's titles and picking up on the Judas theme of the novel; in the U.K., it's The Dying Breed, emphasizing another theme, the bloodlines of horses and also people (with an additional suggestion of families prone to violent death, a theme in all Hughes's novels so far). The story is character-driven, and Hughes once again shows his background in drama: the characters are individually well drawn, but come to life especially in their interactions with one another. The story is also dramatic, in the sense that is it has the structure of a tragedy rooted in family history. The gangsters that have haunted the books are back again, in a slightly different assortment of the Halligan family, as well as the pro- and con-Loy police and other running characters--more fully realized than the minor characters in some crime fiction, and without the usual cliches of speech or action. The story relies to a very large extent on the lies that people tell, or the information they withhold, from Loy and from each other. Loy bounces from one set of assumptions to another, as the truth, or some fragment of it, unfolds. The plot works better at the level of metaphor than as a reasonable story, but it's really the writing that holds the book together, a fluid and allusive style that fits very well with the symbolic rather than rational storyline. And after all, the plots of Hammett or Chandler don't always make straightforward sense, and Hughes is operating, as I said, at the level of tragedy rather than slice-of-life fiction. There is, however, a self-mutilation that I find difficult to swallow (I'm making a little joke, but I won't spoil the plot by explaining it here). But Loy's voice as narrator is solid and believable: he's lively, without being overtly clever or glib like some crime narrators, to keep the reader on his side. And the rhythm and flow of Hughes's prose style is rare eloquence in the field of crime fiction.
Posted by Glenn Harper at 1:04 PM No comments:

Coming up next: the new Declan Hughes and Brian McGilloway from Ireland and the first of Swedist crime novelist Camilla Läckberg's novels to make it into English. But first... Serpent's Tail is bringing out new edition of How the Dead Live, by Derek Raymond (a pseudonym used by British writer Robin Cook--no, not that Robin Cook), with a new introduction by Will Self (who had stolen the title for one of his own books without having read Raymond's book)--giving an excuse to reconsider the Factory series that Raymond-Cook published in the '80s. Raymond broke new ground for noir fiction, updating classic pulp noir with an almost baroque style of writing and a police detective (nameless) at the center of the narrative rather than the private detective that is more typical of classic noir. Raymond certainly established a precedent followed by Ken Bruen (and others) years later, the irritable, violent, and philosophical detective that lies behind Bruen's police detective and to some extent his ex-Garda private detective as well. As in any kind of writing, crime writing generally falls into two categories, in terms of style: a transparent, almost journalistic style and a self-conscious style that calls attention to itself as a narrative. Raymond definitely falls into the latter category. Not only does the detective-narrator use dated London slang (probably dated when Raymond was writing) but also a manner that includes colorful, pithy observations and asides--even extended philosophical considerations of death, loneliness, and social deterioration (Raymond is perhaps the poet of the Thatcher years). And the plots of the Factory books are also distinctive: while most of them are set in gritty London, How the Dead Live moves out to small town England--but not a cozy village: this is the small town of Gothic extremes. Indeed the plot is extremely Gothic, rather than crime or mystery oriented. The detective is sent down to the village to look into the apparent disappearance of a leading citizen's wife, who has been missing for months without the local constabulary taking any notice. What the London detective finds is a crumbling manor house, with beautifully described ruined rooms, and a defrocked physician who has done something dreadful with his wife (all will be explained in a more or less reasonable manner, but the Gothic atmosphere is as think as Jane Eyre or the Surrealist/Symbolist excesses of the turn of the previous century). All of that with the tough detective on top of it is a heady mixture bound together by Raymond's quirky prose. This is definitely a unique and distinctive read, quite different from even Raymond's other books (much less the run of the mill detective or mystery novel). What the current crop of crime fiction owes to Raymond is his example of thoughtful, distinctive prose along with the hard-boiled police detective--but a little weirdness perhaps, too, in some of the "mire" of Arnaldur Indridason's first novel, as just one example of neo-Gothic noir. I can only ask of the living inheritors of Derek Raymond's mantle: more, please.
Posted by Glenn Harper at 9:10 AM No comments: