My review of The Trespasser, by Tana French, is posted on Los Angeles Review of Books, as of this morning:
https://lareviewofbooks.org/article/forensic-thousand-one-nights/
@lareviewofbooks
Posted by Glenn Harper at 8:33 AM No comments: 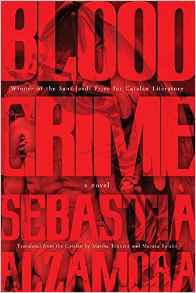 At first glance, Sabastià Alzamora's newly translated Blood Crime sounded interesting: a crime novel set in the Spanish Civil war, written in Catalan and based on a massacre that occurred in Barcelona. Then I read this sentence in the blurb: "Narrated by a vampire who thrives in the havoc of the war." A historical vampire thriller; not my kind of thing, really. But I was flying off for a work meeting in another state, and needed something to read on the plane, so I took it with me.

From the first, this is a different kind of vampire. Then, he actually only narrates a few sections of the book. And what comes between, though still dealing with vampires, especially in the first half of the book, is quite interesting. Not only war and vampires, but massacres, a fantastic automaton, a history of monsters (including the vampire), and various horrors of a war that (based on this book) most of us outside Spain have not understood very well.

At times, the book reminded me of V., Thomas Pynchon's first novel. Blood Crime is not as kaleidoscopic as V., but they two novels share a grotesque sensibility and a sexualized cruelty that is sometimes overt. Pynchon goes further in that direction (as anyone who has read V. will clearly remember) but Blood Crime has some of the same theatricality and horror.

The plot does begin with a vampire attacking a monk and a young boy (told through the monster's eyes), and then shifts to the policeman investigating the crime, alternating with passages from inside a sort-of hotel where other monk's in the same order (Marist brothers) are hiding, to a cloister whose mother superior is the big sister of one of the revolutionaries who are beginning the systematic murder of clergy and other religious. Plus a judge and a coroner (also something of a historian of vampires and other monsters) who are engaged in a bizarre enterprise of their own, various members of the revolutionary party, a bishop, and a young nun tasked with writing a musical score beyond her abilities. And all with the government (Franco's crowd) raining bombs down onto Barcelona. The effect is something like hell being opened up by the violence of the war.

It's a fascinating book whose strangeness overcomes the lack of a single central character or novel. It's more a tapestry of awe and horror, man-made and possibly beyond. It's not really a mystery (since we know who committed the crime, though we don't know for a time who the vampire is), and not a police procedural (since any sane procedure has broken down in the maze of corruption and violence of the war, and it's not a thriller of any ordinary sort. The more generic "crime fiction" certainly applies though, and Blood Crime twists the genre in new and interesting ways.

Posted by Glenn Harper at 10:45 AM No comments: