One from Istanbul, one from Barcelona 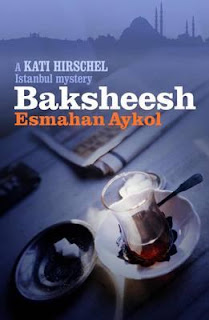 Baksheesh, by Esmahan Aykol, and The Sound of One Hand Killing, by Teresa Solana, have a few things in common. Both have considerable comic elements; both have a meta-fictional premise (Aykol's heroine, Kati, owns a crime fiction bookstore, so there are frequent references to crime writers; and the client for whom Solana's unlicensed private detectives, twin brothers Borja and Eduard, are working is a crime writer named Teresa Solana. Plus both are set in Istanbul and Barcelona, cities not unknown to crime fiction but less heavily represented in the genre than, say, Italy or France, not to mention U.K. and U.S.

But The Sound of One Hand Killing is more clearly satirical in intent. Solana is skewering Catalonian society, as in her earlier novels, and new-age fads this time as well. The social climbers and herbal-medicine consumers in the book are quite funny, though Borja and Eduard are somewhat lacking in the traditional skills of the fictional private detective. The joke about Solana being their client isn't leaned on too heavily, so we're not subjected to the full-on metafiction of a few other contemporary crime-comedy writers. Despite the murder of the head guru of the health spa that the brothers have infiltrated on Solana's behalf, the tone is light and the pace fairly languid. It's less a page-turner than a light entertainment.

Aykol's tone is also fairly light, but there's more tension. The main concern of our heroine, Kati, is finding a new apartment, after her landlord has announced a rate increase. She briefly becomes a suspect in the murder of a squatter in an apartment that she seeks to rent (he menaced her and she him), but the murder mystery (and the tension of her being accused) dissipates somewhat in Kati's pursuit of the dead man's lover and family, which she manages to infiltrate. The result is a breezy tour through neighborhoods and homes of Turks that tourists would not normally see, with the romance of Aykols first novel, Hotel Bosphorus, mostly (but not entirely) replaced with real-estate lust. As with Solana's novel, Baksheesh is not much of a page turner. The ending, though, is truer to the characters than to the conventions of crime fiction, in an interesting way. Aykol's intention is less satirical than Solana's and more sociological, exploring the corruption and everyday life of the denizens of Istanbul, in the working class as well as professionals and those aspiring to social status (Kati's bookshop offers her inroads into both, which she exploits as necessary).

Both are enjoyable reads and neither is a conventional crime novel. Either would be an effective antidote for an overdose of noir or cozy reading.
Posted by Glenn Harper at 8:37 AM No comments: 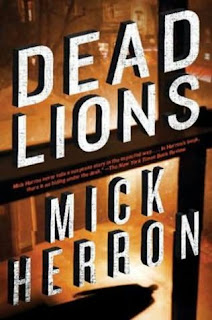 A few years ago, a review copy of a book by an author I hadn't heard of, Mick Herron, arrived in my mailbox courtesy of Soho Crime publishers. The book was Slow Horses; its sequel, Dead Lions, arrived a couple of weeks ago, and the only reservation I have about the new book is that its predecessor was so good that it set an impossible standard for the current story.

After reading Slow Horses, I went back and worked my way through Herron's earlier books, which are all very good. The first one, Down Cemetery Road, is a wonderful book that not only introduces a unique character (private detective Zoe Boehm, who returns in several sequels) but also begins with one of the funniest set pieces I have ever encountered in a crime novel, set (believe it or not) in a dinner party in a suburban home).

Slow Horses introduced Slough House, a sort of halfway house for disgraced spies, members of Britain's MI5 that the organization is hoping to induce to leave the service by setting them up for endless bureaucratic tasks and perpetual boredom in an office distant from the central hub of headquarters. The novel also features some of the twistiest plotlines in crime fiction, something that all of Herron's books share. Dead Lions offers the same setting and the same pleasure in following the sudden twists and turns, but in a somewhat different context. Slow Horses dealt with terrorism (or, more properly, the manipulation of the fear of terrorism). Dead Lions deals with the remnants of the Cold War, within and beyond the security services.

Jackson Lamb, a central but not the main character of the earlier book, is at the very center here. He's a scruffy old warrior, set out to pasture in Slough House, in charge of the other "slow horses," as they are known in the service. When a former agent shows up dead on a train, Lamb involves his team of losers in finding out what might have led up to the death. From that point, the story involves embedded spies, gangsters, former KGB agents (some real and some mythical), and even young love (some casual, some committed, always dangerous). The story is funny but also very dark, and the specter of John LeCarré is explicitly invoked but also undercut or recast in a 21st century landscape.

The novel is beautifully written but also elegantly structured. I have spoken before of a setpiece at the beginning of one of Jo Nesbø's novels, in which a drop of water is followed as it runs through an old house. Herron offers not one but two setpieces, to frame the novel, but just as it's not good to offer spoilers about a book's plot, it's wrong to telegraph the pleasures of reading a well-built book. Ever since finishing Slow Horses (and passing it along to anyone I could think of), I've been waiting for a possible sequel. Now that it's here, I have the pleasure of experiencing it, along with the pang of having finished it (and having to wait again, for more from Herron). I see that he has a story coming out that revives the career of Zoe Boehm--perhaps that will tide me over...
Posted by Glenn Harper at 1:40 PM 3 comments: