A Wyatt sequel, by Garry Disher

A couple of years ago, after a long-ish hiatus, Garry Disher published a new novel about his character Wyatt, under the title "Wyatt." The novel contained several homages to an obvious model for Disher's series, the Parker novels by "Richard Stark," alias Donald Westlake. 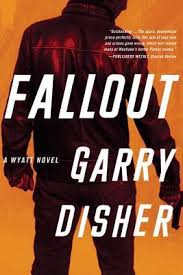 Wyatt was published in the U.S. by Soho Crime,  which subsequently released two older Wyatt novels, Port Vila Blues and the new Fallout, which is a sequel to Port Vila Blues.

Though Wyatt is a newer book, it is in many ways a throwback to the earlier books, with Wyatt as a cool and solid character, almost a sociopath in his distance from normal social interaction. Port Vila Blues and Fallout seem to be from later in the thief's career: he is looking for a last score, and feeling both his age and his isolation.

Port Vila Blues introduced a female character (not that unusual in the Wyatt books) but in this case she reappears in the sequel, which is unusual. Liz Redding is a cop running after both Wyatt and a crooked cop, and (spoiler alert for those who haven't read the earlier book) she ends up allied with Wyatt, personally and professionally. Fallout begins as Wyatt abandons her on the yacht, on which they sailed away from Port Vila.

Actually that's not quite true: the novel opens with another thief, called the bush bandit by the press, who is robbing small banks across the countryside. His name is Wyatt, too: he's the older Wyatt's nephew Raymond. The family link provides us with more information about Wyatt's past than we have hitherto seen, both before and after uncle and nephew are reunited (in crime, of course). The appearance of his nephew, a felt connection with Liz, Wyatt's failure to achieve any permanent financial security despite a more or less succesful life of crime, and the pressure of a lifetime on the run are all weighing on him

But Fallout maintains two of the most distinctive features of the series: the dark dedication to noir and the naturalistic plotting. The plans of all the characters develop in a way that suggests a straightforward, linear story, but the plans are repeatedly undermined in ways that twist the plot away from what the reader expects and also away from any neatness. The Wyatt novels are messy, like life, and Disher's distinctive style stays away from any sort of artificial plot devices.

Which is not to say there's no structure. Especially in Fallout and Wyatt, the overarching structure is a parrallelism between Wyatt and another violent man, someone engaged in the same line of work as Wyatt but in subtle and not-so-subtle ways less sympathetic to the reader (although Wyatt doesn't himself try all that hard to be sympathetic). In Fallout, it's a prison escapee who has early history with Wyatt and becomes involved with him again (in ways I won't telegraph). These conflicts are resolved not in any super-hero sort of way, but through different styles of thinking and planning.

Fallout involves the jewel robbery of Port Vila Blues as well as the jailbreak, an art theft, a complex confidence game, and related violence and mayhem. But as usual, it's a short book, and a fast one. Disher's other series, about detectives in the Peninsula region of Australia, is perhaps a deeper and more complex set of stories, but the Wyatt books (and Fallout in particular) are extremely well done, and a wonderful homage not only to Westlake but also to the roots of noir fiction. 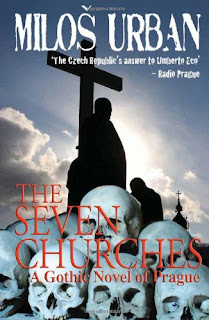 
Posted by Glenn Harper at 6:11 PM No comments: 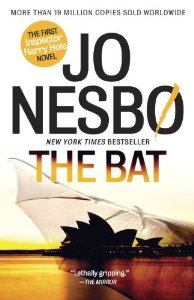 
Posted by Glenn Harper at 9:57 AM No comments: