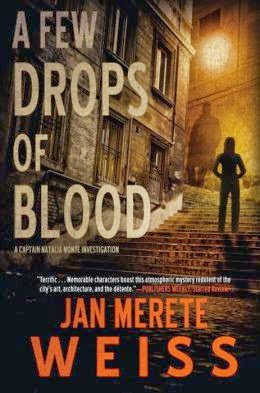 The second volume of Jan Merete Weiss's series featuring Carabiniere Captain Natalia Monte (and set in Naples) is embedded in the life in the streets of the city and in the troubled social history of the region. In the first book of the series, Monte goes underground (literally, into the catacombs, as well as figuratively) jbut in the second, she is immersed in the light of day (though it may not illuminate much).

The story begins with a gruesome crime, two naked, murdered men discovered on the back of a sculpted horse in the garden of a wealthy Neapolitan widow. Natalia and her new partner, a young woman from Sicily, pursue the crime in a fairly straightforward way, through the art, gossip, and gay circles of the city, and at a certain point get derailed into a different kind of story altogehter: one in which conventional law and morality are not at the center.

The murders may have something to do with a vendetta that involves not only the Camorra but also the intertwined stories of the mob, the partisans, and the Fascists during the 1940s. Then there's the mob family perched on the verge of change, as the old boss is about to get out of prison and the young son may not be too willing to give way or go back to the old ways.

Weiss's style is polished and straight-ahead, with a third-person narrator who sticks close to Monte. The result is occasionally elliptical, as murders happen outside the Captain's view and she's left to pick up the pieces. Her personal story, involving not only her former partner in life and work, the Zen-oriented Pino, but also her childhood girlfriends, some of whom are involved in the Camorra in ways that may compromise Monte herself. The plot takes some twists and turns, but Weiss keeps the reader involved and up to speed throughout. By the end, the strong woman a the book's center is matched by strong women other, related fields in ways that have implications for future editions in the series.

A Few Drops of Blood shows Weiss honing her craft and keeping us looking for more and even better things int he future. There are other crime series set in Naples (some in earlier eras) but though Weiss is not a native of the city her portrait of it is concrete, sympathetic, and totally credible (without descending into travelogue).
Posted by Glenn Harper at 11:05 AM No comments: