Of fire, sex, and the blitz: Henry Green's Caught 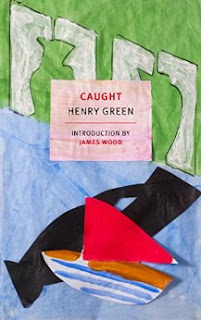 Henry Green's 1942 novel Caught has all the elements of a thriller: a volunteer fireman in London at the start of World War II, the kidnapping of his child, the scenes of bombing and destruction. But Green (not his real name, but he was indeed a fireman in London during the blitz) undercuts the heroism and thrill at every corner. He tells the story in scraps beginning with the end of the kidnapping, when Richard Roe's son is rescued from a mentally ill woman by her brother. Unfortunately for Row, the brother turns out to be his superior officer in the firehouse, later.

But later and sooner are all mixed up, as the narrative moves back and forth through the first year of the war, before the blitz, leading up to a final conflagration and death that are not at all what a conventional novel would provide. Green, though, was not at all a conventional writer. His books (most of which lack dramatic events such as those that frame Caught) dissect sex, class, and daily life in twisted prose and oblique dialogue that together create both comic effects and a tapestry of the everyday.

Sex, one of the constants in Green's work, is a key element of Caught, as the fireman, stuck in a waiting pattern, find solace where they can, with women quite willing to find their own solace in the absence of their husbands or lovers called up for the fight. Neither the sex nor the loneliness (or even the love) are romanticized: Green has the jaundiced eye of a satirist, but he does have sympathy for his characters. The cruel end of Caught, in which the beginning of the bombing is told second-hand by Roe to his wife, sent down to the country with their rescued son, with an inadequacy that he fully recognizes and a cognitive dissonance that he doesn't. The cruelty isn't in the turmoil of war, which from Roe's perspective is thoroughly disjointed and unheroic, but rather in his insistence on telling his wife (an unwilling witness), and in the manner of his telling. Even the sympathy we may have for this unheroic hero is undercut, in Green's dark view of human interaction (dark but funny, in prose that somehow manages to be both heavy and light at the same time). Green was a unique writer, and Caught is a unique novel of war, love, conflict, and human interrelations.

Posted by Glenn Harper at 1:44 PM No comments: