Like most of the books published by Europa Editions, Bandit Love is short, compact, and tightly packed with characters and incidents. [warning: partial spoiler ahead] Just when you think that the book is about to achieve a violent, final act of retribution, it veers off into an indeterminate future—possibly a sequel or possibly an end to the series that carries it forward into its own mythical future.
Posted by Glenn Harper at 12:53 PM 1 comment:

One of the distinctive features of Karin Fossum's Inspector Sejer series is that they're not formulaic. A couple of them are straight police procedurals, but others are told more from the point of view of the characters than the police. Bad Intentions (published in the U.S. this year by Houghton Mifflin in a translation from the Norwegian by Barslund) is different as well, beginning with an incident that seems to be a crime but then doesn't. Fossum also has in several books led the reader to certain expectations about the story that she proceeds to undermine, and that is also true of Bad Intentions. What we might take at first to be a murder among friends turns into an intense story of collective guilt, sociopathic behavior, and loss.

The novel is short and intense, not perhaps my favorite among the Sejer books (but then I'm partial to the police procedural form, which is not the most important part of Bad Intentions). We learn a bit about Sejer, though, now that he is aging, his daughter is not close at hand, and his Sharpei is his closest companion (Skarre, his partner, is on stage only a few times). What I like best about Bad Intentions is the quiet tone, which emphasizes ordinary human feelings and failings, offering in the end a glimpse of hope (or at least coping): this isn't about international conspiracies, criminal gangs, or serial killers. It's a very closely observed, economically constructed story of the needs and bad choices of ordinary people.
Posted by Glenn Harper at 11:55 AM 2 comments:

Camilla Läckberg's The Stonecutter, which arrived in the U.S. this year, is about the miseries that parents visit upon their children, and vice versa. Many permutations are given, and almost everyone in the novel is guilty of something (so there are lots of suspects). This is the third book featuring Patrik Hedström, a detective in a small town in southwestern Sweden. His partner Erica, has just had a baby (and the baby is making her miserable in the ways that babies do). A young girl's body is brought to the sea's surface, caught in a lobster trap, and Patrik is thrown into the investigation of her disfunctional family and various possible perpetrators.

Along the way there are other, less dire crimes, and occasionally Erica's sister puts in an appearance--though more in a way that seems to be continuing her role in previous books and preparing for her role in a subsequent book than in any way directly relevant to the present book). A parallel story concerns a stonecutter in the area in the 1920s who falls under the spell of his employer's daughter, Agnes. Their story begins as a sort of reversed Elvira Madigan (a great Swedish romance directed by Bo Widerberg who also did the Martin Beck movie most praised by Maj Sjöwall), but Agnes is a particularly poisonous character and I found myself growing tired of this historical aspect of the mystery (a reader will probably figure out along the way what the relevance is to the present-day mystery.

There are a couple of crimes of opportunity that seem a bit contrived (a character is at the perfect place, and with the necessary "equipment" at a perfect time), and there's a good deal of fumbling around by the less effective detectives on the small-town force, along with the requisite incompetent boss--who also has a subplot that is relevant to the parents-and-children theme but not to the story per se.

I heard the Audible recording of The Stonecutter, rather than read the book on paper, and I found myself getting a bit impatient. If I'd had pages in front of me I might have started skipping ahead. Still, the story is well constructed, and its "cozy" setting is nicely contradicted by some of the family horrors concealed behind closed doors. Läckberg is not my favorite of the current crop of Scandinavians, and this book could have used a bit of trimming, in my opinion, but I'll still line up for the next one.
Posted by Glenn Harper at 11:13 AM 2 comments: 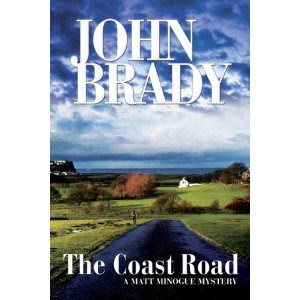 "Subtle" may not be an adjective that pops into your mind when reading most crime novels, but it does describe John Brady's new Matt Minogue novel, The Coast Road, so far accessible only from Canadian sources. Dublin Inspector Minogue has been sent to a new "cold case" sort of squad, charged to review unsolved cases, and his former colleague Tommy Malone is to be his assistant. Malone, as anyone who has followed the series, has a lot of baggage, and adds to it at the start of this book with a suspicious encounter with the gangster who had his twin brother (who was also a gangster) killed. And the background is post-Tiger Ireland, with all its still current difficulties, as well as the revelations of abuse by the priesthood.

But Minogue and Malone's survey of cold cases is derailed immediately into a review of the murder of a homeless man who had roamed the east coast of Ireland. The investigation leads to a nun who runs a shelter, a dodgy wannabe journalist, and a reluctant sister. But most of the book is told in conversations and interviews that circle around the facts and the plot rather than approaching them directly. What is actually going on, much less what led to the murder, lies beneath this surface for the reader as well as the detectives.

Fortunately, the dialogue is lively (all the more so because of the wit of the detective and the skill of the author). Minogue is dealing with some change in his family, not only with his emigre children but with his wife's involvement in a group that seeks religious renewal (Minogue himself has little sympathy for the Church).

A major theme is generational differences, particularly between urban Malone, not interested in the Irish language, and Minogue and his cohorts who were raised speaking (at least a little) the language. Among Minogue's generation, the regional differences (particularly in dialect and accent) of Ireland are important markers and the source of much slagging among the cops, while Malone is more of a European. The plot also turns on changes among the criminal community, including international participation.

Anyone who has followed Brady's work will be delighted to discover that there's a new book that is easily up to the standard of his earlier novels. Anyone not familiar with Brady could well start with The Coast Road, and if you have a taste for something quite different from the straight-ahead thriller sort of crime novel risks becoming the kind of fan that eagerly searches through used book sites and stores for the other books.
Posted by Glenn Harper at 5:46 AM 1 comment: