The Final Silence, by Stuart Neville 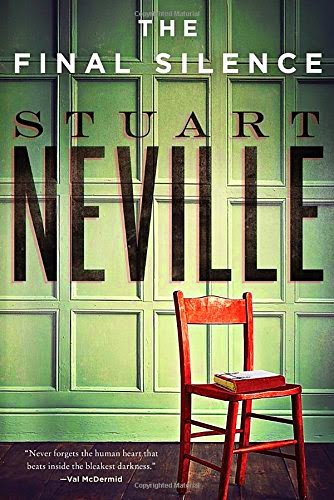 Given the very dark nature of the stories in Stuart Neville's Belfast novels (of which The Fatal Silence is the 4th), that title suggests a very bleak story indeed. And there's plenty of darkness in the tale that unfolds from the slow death of Raymond Drew (of natural causes) at the beginning. But there is a kind of open-ended, skeptical moment of optimism that provides a breath of hope.

Though before that, Drew's niece discovers and opens her uncle's journal, a true Pandora's box of evil deeds done in the past and evil consequences to come in the present. The whole Belfast series is haunted (almost literally) by the Troubles (each book in a different way). Here, the calm and prosperous surface of things fails to contain the eruption of violence that has its source in the politics of the past as well as the kind of violence that will always be with us.

The violence engulfs everyone touched by the diary, including the niece, her parents, and the still-surviving main characters of the series, the policeman Jack Lennon, his daughter Ellen, Ellen's mother's family (still striving to take her away from her father), Lennon's long-suffering girlfriend Susn, as well as a senior cop new to the series, DCI Serena Flanagan (whose strength as a detective is being sorely tried both by her contact with this case and by events in her private life).

Lennon has always had a problem as a policeman, since he's a Catholic on an overwhelmingly Protestant force (and being a cop makes him anathema to the civilian Catholics as well). His actions in a previous book have made him even more hated, especially by one specific cop who is now in a position to hurt him, and his involvement in the violence after the discovery of the diary cast him even more into the wilderness. What keeps the whole proceedings from being depressing is Neville's skill in both moving the plot forward relentlessly and  making the reader care about what happens (partly due to Lennon's redeeming virtues: his love for his daughter and his willingness to put himself on the line against a threat to his own little family or someone else being harmed  or threatened by dark forces old and new). The supernatural element of the series has gradually lessened, and is present here only in a suggestion of Ellen's second sight (not a major factor in the plot).

Neville's Belfast novels are some of the most powerful stories coming out of Ireland and Northern Ireland today, and that's quite an accomplishment given the high quality of so much crime fiction originating on the island now.
Posted by Glenn Harper at 12:50 PM No comments: