The Fragility of Bodies by Sergio Olguin 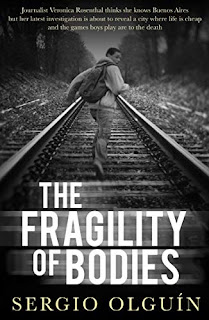 The Fragility of Bodies is a crime novel from Argentina, and Sergio Olguin's story is a departure from the usual crime fare. Veronica Rosenthal is a magazine writer who decides to look into the suicide of a commuter-train operator in downtown Buenos Aires. What she. uncovers, over the 377 pages of this Bitter Lemon edition translated by Miranda France, is a bizarre betting game that preys on young would-be soccer players in the slums around the city, particularly those along the train lines. Veronica is a woman in control of her life, single and intending to keep that way, and in her professional life she is determined and implacable.

She finds a train operator who is willing to talk to her and embarks on a journey of personal and professional import. Olguin's text is lively, shifting among the various character and the sites in the city relevant to the tale, so we get a vivid story as well as a 3D view of Buenos Aires today. At some points in the story, I became as frustrated as Veronica with the lack of progress in her research, but stick around for the satisfying, if also quite dark in the way of most noir visions of conteporary life. Olguin's story is fascinating, and his novel is unlike anything else you will find in crime fiction.
Posted by Glenn Harper at 2:56 PM No comments: