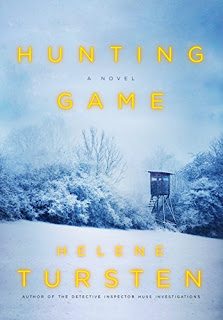 I've read most of Helene Tursten's Irene Huss novels, and seen the Swedish TV series, so it was interesting to see that she has a new lead character for a new series: Embla Nyström of the mobile unit of the Gothenburg police--younger, single, and a boxer instead of a jujitsu champion. I regret to say that I lost patience with the novel itself, Hunting Game. The setting is an annual moose hunt on private property, among a group of residents and guests who indulge in this hunt during the season every winter. But other than Embla, I didn't find the characters terribly compelling, or perhaps it was the claustrophobic environment of the cabins and the hunt itself that caused my problem.

Another reader of many of the Huss novels has gotten tired of the soap opera of Huss's family life, and Embla certainly solves that problem. She is independent, and though part of a team, this novel isolates her from the other cops because she's part of the hunt and knows a lot of the people involved. When the cops do get involved, after one of the hunters disappears, she is still on her own most of the time, right up to the high-threat conclusion.

Another difference from Irene is Embla's willingness to doctor the evidence and bend the truth (not that that sort of proffssional deception is beyond Irene, but Embla is particularly blatant in an incident I won't describe since it would be a spoiler).

So I enjoyed Embla, and the set-up of the moose hunt was interesting, but ultimately I didn't sympathize with the hunt or the other characters--more Embla please, but please, not out in the forest hunting game...


Posted by Glenn Harper at 9:01 AM No comments: