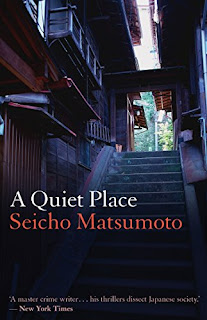 Two recent Japanese crime novels show a double view: American genres seen through the distinctive lens of Japanese culture.
The first, Seicho Matsumoto''s A Quiet Place is in an old-fashioned psychological noir mode like some of Patricia Highsmith's non-Ripley novels. A husband discovers, on his wife's death, that she has been frequenting a hotel that is nowhere near her usual territory. Investigating, he becomes obsessed with the idea that she has been having an affair, and then obsessed with the supposed partner, a man whom he begins to follow. The violent consequences and the psychological weight of the violence are inevitable, and the inevitability is a big part of the narrative. That's pretty standard territory for noir fiction in the U.S. in the '50s and 60s, but the dated quality of the plot is compensated, for a Western reader, by the glimpses into the distinctive qualities of Japanese culture, such as the dizzying series of obligations and debts surrounding a funeral, funeral gifts, etc. 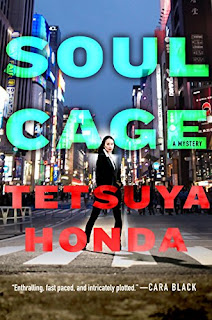 The other, Tetsuya Honda's Soul Cage, is a police procedural in the mode of Ed McBain, though the lead character is a woman, an ambitious cop who struggles with the hostility and/or affection of the other cops in the elite murder squad. The tone is light rather than heavy, with the cops' banter and jealousies takeing up a large part of the narrative, but the crime itself is distinctive and interesting, traced back through a series of flashbacks with a distinct flavor of Japanese culture (particularly in the construction business and the gang world). Again,  one of the most interesting aspects of the novel is the day-to-day portrait of Japanese life--for instance, when the cops need to rush off to a crime scene, they almost always go via public transportation...

A glimpse into other cultures is not the only reason to read international noir, but noir is an excellent genre for getting glimpses like these. The intensity of emotions in books like A Quiet Place offer more than superficial character portrayal, and the street life of books like Soul Cage give a better view of the larger culture than a domestic drama can.
Posted by Glenn Harper at 7:31 AM No comments: