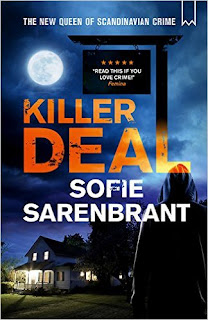 Killer Deal is a new Swedish crime novel, the first in an apparently popular series to be translated into English. The setup is interesting (a family is in the midst of separating, and becuase of that selling their house. After an open house the husband is found dead. There's also a nice twist at the end, creating an unexpectedly open conclusion. However, I just could not get into the book--it's too suburban, almost small-town cozy. There's too much intertwining of the detective's life and the people involved in the case, as if everyone in this part of Stockholm is separated by considerably fewer than six degrees.

The writing is OK, geared more to best-seller than literary status, and the characters are believable. But there are lots of subgenres in crime fiction, and I guess not all of them appeal to all of us. And it's definitely a window on a suburban way of life quite different from the setting of a lot of the Scandinavian crime wave.
Posted by Glenn Harper at 5:39 PM No comments: 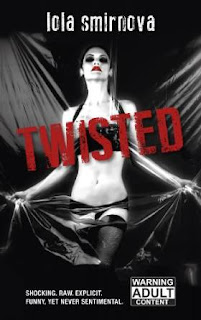 Lola Smirnova's Twisted and Craved, the first two novels of a trilogy, apparently, offer enough crime, misery, drugs, alcohol, sex, and even occasional pleasure for a dozen crime novels, but these are not really crime novels (despite the excess of crime, especially crimes against women, in them). Instead, Smirnova has constructed an episodic fictional memoir by Julia, who with her sisters Natalia and Lena, depart from a difficult life in Ukraine into an even riskier world of sex work, primarily nude dancing and sometimes prostitution. They are not being trafficked, they are entering into contracts more or less with their eyes open. And the sisters, each in her own way, are looking for a home life, with or without romance--in some ways the novels are the antithesis of romance fiction.

The story begins with an S/M scenario and then flashes back to the beginning of Julia's story. The sisters travel first to Luxembourg and then to Turkey, encountering many, many unpleasant men, across a range from customers in a strip club to rapists. Julia descends into drug addiction, and her sisters try to save her and eventuall succeed, returning to Ukraine and decide to start a new life as entrepreneurs, starting, with their mother's help, a beauty salon. 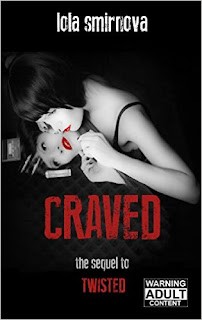 Craved, the second book, begins with a new temptation to leave their new life (the salon isn't doing all that well) for Cape Town, South Africa, for a new gig as dancers. At first, they find the new situation easier than their European experience: prostitution is now assumed to be part of their job, though that practice lurks always below the surface as the underside of their work. Each sister finds a patron, even in Lena's case a husband (something she has been searching for all along) but love is not part of the equation at any point. But while Julia finds her own patron in a seemingly kind Arab prince, things begin to spiral out of control for all three: even the truths that they had assumed about their parents and each other start to dissipate. By the end of Craved, things are very bad, and a sequel will need to dig Julia nad her sisters out of a very dark place.

There's a lot of sex in these books, but nothing even remotely sexy. But Julia's tale is compelling, and the story moves quickly along, pulling the reader into the net into which the sisters have themselves become entangled. This is a new kind of noir, not following any of the rules of the genre but conjuring up the true core of noir fiction's vision of contemporary life.
Posted by Glenn Harper at 2:43 PM No comments: 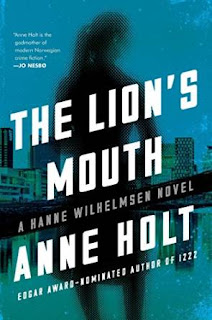 The principle characters of two of the most prominent Norwegian crime writers, Anne Holt (author of the Hanne Wilhemsen series, set in Oslo) and Gunnar Staalesen (author of the Varg Veum series, set in Bergen) in a recently translated novel by Holt, The Lion's Mouth, when Wilhemsen runs into her old friend Varg in a cafe. It's only a passing moment, a kind of homage from one writer to another, as we can see in The Lion's Mouth and in Staalesen's recently translated We Shall Inherit the Wind.

Holt's novel is immersed in Norwegian political machinations and scandals when the prime minister, scarcely 6 months after she had taken office, is found dead in her office. The investigation, not by the senior cop Hanne, because she is in America on a sabbatical until almost halfway through the novel, but by her friend Billy T and, of course, everyone else in the Norwegian police and security services. There is also a three-decades-old scandal, uncovered recently and under investigation by a commission headed by an old friend of the prime minister, dealing with an unusual number of babies who died in the year 1965.

At times, this is a political thriller something like that other giant of Norwegian crime writing, Jo Nesbø, or perhaps the Swedish writer Leif GW Persson, but the tone of Holt's writing is quite different. She alternates gritty and hard-nosed investigation with some light-hearted, even childish, behavior on the part of Billy T and others, injecting a bit of the atmosphere of a cozy mystery into this otherwise more noir and urban tale. 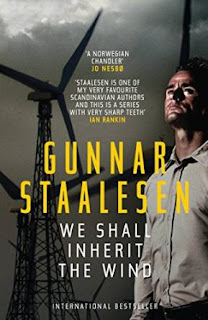 Staalesen's hero Varg is a private detective whose career started as a social worker, and he often investigates the disappearance of children (as in the case he mentions when he runs into Hanne), but in We Shall Inherit the Wind he is asked to find an adult male who has disappeared just before finalizing a deal to build a wind farm on a prominent site above a fjord. We learn a lot about the politics of clean energy (rather than Norwegian national politics) as well as the machinations of families involved in one way or another with the site of the proposed wind facility.

The book begins with Varg's girlfriend, near death in a hospital, and circles back to the story in which she is led to that hospital bed. The tone is very dark, due in part to that framing device, but there is also a lot of violence, threats of violence and even a crucifixion, lending an apocalyptic air in line wih the Biblical title of the book. But Varg, who is also the narrator in this series, is an affecting example of the tragic hero outlined by Raymond Chandler's famous essay on hard-boiled fiction, while also being humane and vulnerable (very much in character with his original profession).

It's appropriate and amusing for Hanne and Varg to meet, in Holt's bit of metafiction, but they otherwise don't have a lot in common: Varg is immersed in the dark side of urban life, with rarely a moment of respite, while Hanne diverts her (and the reader's) attention with more settled relationships in her own life and in the lives of those around her. Between the two writers, they describe the whole range of the rich vein of Scandinavian noir that is unique to Norway. 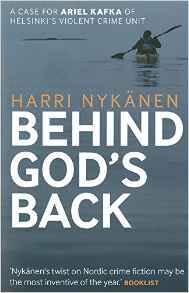 Posted by Glenn Harper at 9:04 AM No comments: