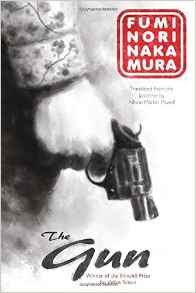 Fuminori Nakamura uses different strategies in each of his crime novels, but in each case his concerns are philosophical, rather in the manner of Albert Camus's The Stranger (I've also seen Nakamura compared to Mishima, but I don't know that Japanese author's work well enough to judge the aptness of the comparison). In The Gun, a character/narrator not unlike Camus's existential hero is not isolated socially but has a problem with attachments, perhaps a result of his childhood and adoption, but the problem seems so deeply rooted that it is perhaps simply how his brain works. He is a sociopath of a sort, with little or no empathy for the women he has sex with, his friends and neighbors, or the possible victims of his ultimate crime.

What becomes the focus for his attention and attachment is a pistol that he finds, next to a body (likely a suicide). Taking the gun muddles the scene for the police, who do not classify the case as suicide because no weapon was found. But for the narrator, the gun becomes at first simply the focus of his fascination: it is a beautiful machine that must be cared for, respected, and hidden. But gradually the function of the weapon also becomes part of his fetish.

Along the way, several encounters provide a counterpoint to the gun: his closest friend, a female fellow student, and a woman he meets for casual sex each demonstrate the narrator's daily life of little affect, ambition, or interest. He is in a way a blank canvas on which the gun has been inscribed.

The conclusion that the story seems to be inevitably approaching in the last half of this short book is suddenly subverted and twisted into a sudden explosion of violence of a different sort than the narrator had intended, providing a more satisfying portrait of the character and his situation than a more straightforward ending could have. This is an intense, claustrophobic, and effective noir/philosophical thriller.
Posted by Glenn Harper at 6:38 AM No comments: