Duca is a disgraced physician, just released from prison, when a wealthy man offers him an unconventional job, watching over (and if possible, detoxifying) the alcoholic waster who is his son. Duca takes the job, not having any other prospects, but discovers that there is a crime underlying the young man's lethargy and alcoholism. He enlists the help of a policeman from his past as well as a young woman that he meets, but basically Duca draws all the narrative energy upon himself.

Which is a bit of a problem, since that young woman is the most interesting character in the book, and she reaps the whirlwind sown by Duca. I won't go into any more detail, but Duca makes some extraordinarily stupid decisions as he tracks down the criminals, but he's not the one who will pay the price for the mistakes.

The writing style is a bit indirect and always interesting, and a reader is drawn along by the characters, especially the unfortunate young woman, into the seedy, noir milieu of post-War Milan. The criminal enterprise at first seems even a bit quaint, but turns as sinister as any current crime before the end. Scerbanenco presents a moral conundrum for the reader: Can we empathize with Duca when he is drawing misfortune on other characters? If anyone remembers Duca and the Milan Murders or has read any of the other books in the original Italian, please let us know if Duca becomes a character that it's easier to identify with.

Posted by Glenn Harper at 2:17 PM No comments: 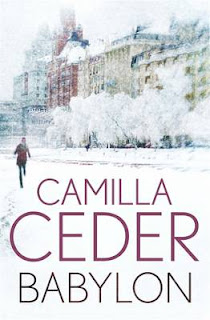 Camilla Ceder's Babylon, the second in her series featuring detective Christian Tell and his (now) girlfriend Seja Lundberg, has a family resemblance to a specific end of the Scandinavian crime spectrum: specifically that occupied by Mari Jungstedt and Camilla Läckberg. In all these writers' books, a central male character (a policeman or a reporter) meets a woman who is a witness in the first book's crime, and they become a couple in later books. In Läckberg's case, the non-cop/reporter female character is her central character, Erica Falck, is her central character and continues to be involved in crimes and investigations. In the cases of Jungstedt and Ceder, the relationship remains central to the stories, but the non-professional partner is less involved directly in the crimes (though in the case of Jungstedt she's dragged into events at least once more).

Also, the books by all three are about the people in the story more than the crimes. And in all three, the private lives of the central characters remain an important aspect of the books, even when not directly related to the current plot. For example, Seja, in Babylon, is not really involved in the crime plot at all, but still remains a central character, with a good portion of the book told from her point of view. In other Scandinavian crime fiction, the detective's private life is frequently part of the action, but the wife/husband/partner is less central to the story (think of two other writers whose books are, like Ceder's, set in Göteborg, Åke Edwardson and Helene Tursten).

The emphasis on the partnership rather humanizes the investigator in the books of Ceder, Jungstedt, and Läckberg, but also shifts the stories somewhat away from the "noir" end of the crime fiction spectrum, which traditionally focuses on loners or at least detectives with difficult private lives. The observation isn't a value judgment--just an observation about the nature of Ceder's books.

The plot of Babylon has something to do with the title's historic region, but is mostly set in and around Göteborg. There's a rural aspect, too, since Seja continues to live in a remote cabin with no indoor plumbing (something that's hard for me, at least, to grasp in a Swedish setting--imagine the outhouse on cold nights...

But Ceder conveys both urban and rural settings vividly. The story starts with an interesting character who's more than a bit of a mess, a character who might have been more central to the story than she turns out to be here. She's a jealous girlfriend whose live-in boyfriend is murdered, along with his academic mentor (who is also his lover). The evidence points toward the jealous girlfriend, but there's a break-in at her house that raises other possibilities. The ex-husband of the mentor is implicated, and the reader gets a glimpse of the men involved in the break-in--leading to complications and shifts between Denmark, Turkey, and Sweden that Ceder handles very well.

I have to confess a preference for crime fiction with a somewhat less domestic focus (hence the title of this blog), but Ceder manages to keep a reader's interest in her characters, even the ones who don't figure directly in the crime. The uneasy relationship between Seja and Christian is solidly based in their personalities, but I confess I becaue a little impatient with the amount of time devoted to their personal pleasures and difficulties rather than with the crime at hand. My prejudice as a reader, I'm sure. I'll probably continue with Ceder's series, but my main interest in Swedish crime fiction is at the other end of the spectrum I mentioned above.

Posted by Glenn Harper at 12:09 PM No comments: 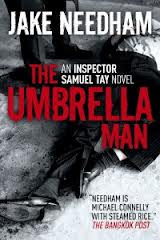 Posted by Glenn Harper at 10:58 AM No comments: