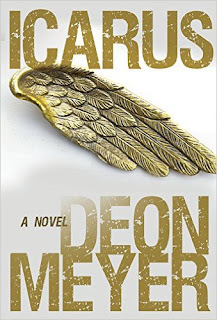 Deon Meyer returns once again to his Alcoholic Afrikaans cop Benny Griessel in Icarus, which has a timely theme. A body is discovered in the dunes, and is discovered to be that of the CEO of a website called My Alibi, which provides not only verbal alibis but also documentation for affairs and liaisons (not quite the same as Ashley Madison, and so far that scandal has only produced the end of a CEO's career, rather than something more permanent).


Griessel has fallen seriously off the wagon, and his personal struggle leaves space for his partner, detective Vaughn Cupido, to step into the spotlight (continuing Meyer's promotion of secondary characters into more prominent roles). While Griessel sinks into alcohol-fueled depression and Cupido gains new self confidence, the son of a wine-producing family sits in a Cape Town attorney's office making a long confession involving his family history and the story of winemaking in South Africa, linked to the murder, obviously, though the reader will not know just how for quite some time.

The result is a less frenetic story than some of Meyer's recent books, but still a very involving one, and with a great glimpse of the very particular wine tradition in the country. The emphasis here is on character and narrative rather than pacing, an interesting shift and evidence that Meyer isn't settling into any pattern, not even his own previously succesful one.
Posted by Glenn Harper at 11:47 AM No comments: 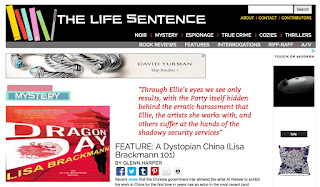 Posted by Glenn Harper at 4:43 PM No comments: