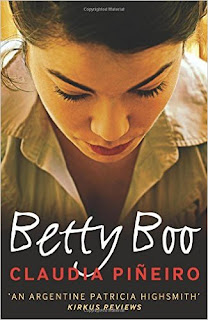 Betty Boo is Claudia Piñeiro's best book to be published in English so far. Like Nurit Iscar, her heroine in this novel, Piñeiro is the "Argentine Queen of Crime," but unlike her heroine, Piñeiro has not turned away from crime in favor of "serious" fiction. Instead, she is exploiting the norms of crime fiction to investigate serious issues of not only crime but also the contemporary way of life in her homeland and the wider world.

Betty Boo is in part a satire of the decline of newspapers, exemplified by a Jaime Brena, a writer who has been supplanted on the crime desk of his paper, El Tribuno, by the "crime boy," whose idea of investigative journalism is to do a search on Twitter and Google. When a prominent citizen is murdered in the gated community of La Maravillosa, his throat cut in much the same way his wife had previously been murdered, the editor El Tribuno (and Nurit's former lover) convinces her to move into La Maravillosa and send daily posts to the paper from within the community that is the scene of the crime.

So Brena the supplanted crime editor and Nurit, the former crime novelist (she gave up writing when El Tribuno published a damning review of her "straight" novel), along with the crime boy and Nurit's circle of friends are swept up in a widening spiral of murder, influence, and privilege. The resulting story is frequently funny and always compelling. Piñeiro has worked some of these same themes in her previous books, but here all of her interests come together in a story that is both satirical and engaging. Betty Boo is hands down the best book I've read so far this year.
Posted by Glenn Harper at 4:52 PM No comments: