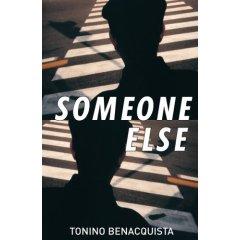 I've already mentioned the first book by Tonino Benacquista to be translated into English from the French original (Holy Smoke), and the second has recently become available (Someone Else), also from Bitter Lemon Press in the UK. Someone Else pursues two different lines of narrative that were characteristic of one of the masters (mistresses?) of noir, Patricia Highsmith: the casual encounter that precipitates events of great consequence to the parties involved (as in Strangers on a Train) and the amoral manipulations of Highsmith's Tom Ripley character. Plus there are other elements suggestive of those Highsmith novels: the use of a tennis match as a significant detail (one of the characters in Strangers on a Train was a tennis player) and a character who is a framer by trade (one of the characters that Ripley manipulates and then befriends is a framer, and owns a frame business, just as in Someone Else). What is missing from Benacquista's novel is the sense of menace that Highsmith injects into her novels, even when there hasn't been a murder yet. There is in fact never a murder (except by a character who "kills off" his former self), though there is toward the very end a shooting. And though a detective agency plays a large role, Someone Else doesn't really ever rely on the nature of detective work for any of its narrative drive. Someone Else is definitely in the noir tradition, not only in the references to Highsmith but also in Benacquista's use of despair as a driving impulse for the two main characters; but it is more in the tradition of the early noir than the contemporary, bloodier and more violent entries in the genre (remember the slowly developing plots of James M. Cain, for instance--modern noir is more in the vein of the notorious No Orchids for Miss Blandish, not by Cain but closer to that era than to our own--No Orchids stared with a violent bang and descends in violent stages to a grotesque and melodramatic conclusion, a plot closer to our own era than to Cain's). Someone Else concerns a bargain--more a bet really--between two strangers who meet in a tennis club in Paris. Over much vodka (a new experience for one of them, previously a teetotaler) a proposal is made that each of them should try to become the "someone else" that he has dreamed of becoming throughout his mundane life. Each succeeds, in very different ways, and each achieves a payoff of a sort. The narrative is engaging, though not comic in the way Holy Smoke was, but the narrative could have used some editing or perhaps some relief from the very gradual ascent (or descent) of the characters in their new lives--perhaps some more sudden, even violent, shifts to spark things up. But who am I to give the author advice. If Someone Else does not quite rise to Highsmith's heights (and doesn't seek the same humorous narrative rewards as the author's own Holy Smoke) it's still an entertaining and interesting return to the early traditions of noir.
Posted by Glenn Harper at 10:44 AM