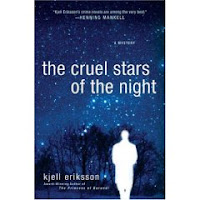 Kjell Eriksson's latest crime novel featuring Uppsala detective Ann Lindell is coming out soon in the U.S. The previous one to be translated into English was The Princess of Burundi, which I reviewed here not so long ago--I liked it a lot. Princess is a "collective" crime novel in what seems like a Swedish tradition, with the whole detective squad as major characters, along with numerous working class characters. The new one, The Cruel Stars of the Night, is a bit different. Lindell was on mternity leave in the previous one and now that she's back on duty, she takes up more space and the other cops get less. Plus the crime this time is more involved with the university side of Uppsala's town/gown divide. Where Princess was more sociological in character, Stars is more psychological. Two strains flow through the novel: the investigation of the murders of three old men whose lives seem unrelated and the case of another old man who has gone missing. That latter thread of the plot is told mostly through the eyes of his daughter. The psychological aspect of the novel takes a while to get going, but once it cranks up it will involve the reader effectively. And Eriksson is a bit more to my taste than some of the new Scandinavian wave of crime novels--he's more naturalistic than some others; in comparison, Nessser is more mannered, Marklund more genre-driven. Ann, a single mother, copes with some of the same family problems as Marklund's Annika, but Ann is by far the more likable of the two. Of the other Scandinavians, Eriksson probably has more in common with Karin Fossum of Norway. The translations are evidently being done out of order, and there are several references in Stars to previous cases that sound interesting (Princess is the third or fourth in the series and near as I can tell Stars comes a couple of books later in the series). I hope the publishers in their wisdom will commission translations of the other books previously published in Sweden. Though I liked Princess better than Stars, Eriksson is one of the best of the Scandinavian crime wave.
Posted by Glenn Harper at 7:16 PM

I believe Princess is #4 and Stars is #6. He doesn't seem to have a UK publisher (yet) alas.

Yes, that is correct: The Princess of Burundi is #4 and The cruel.. is #6.
Next year, I think, St Martin/T.Dunne Books will publish #7, The man from the mountain. It´s a story with a Mexican connection.
In August #8 is coming in Sweden.
April 17 I´ll go to US/Canada on a tour: NY, Toronto, LA, San F and Seattle, together with Nesser, Frimansson and Tursten.
All best
Kjell Eriksson, Uppsala, Sweden

That's great news. Don't suppose you can get your tour to visit the UK :-).

I like the fact that Annika is not very likeable. I am not very likeable, either -- having children and a job has made me far less likeable than I feel comfortable with. That's why I like unlikeable role models, makes me feel better -- not so much to live up to, and a sense that we are all human.
Still, I would like to read these, if I can work out the order between your and Karen's hints.

Kjell, do you know if there's any word of a UK deal on the horizon? I had to order Princess from the US... Though won't be too dismayed if that has to be my recourse for Stars as well.