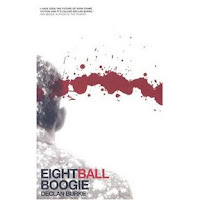 There is classic noir popping up in what would once have been unusual places. Alan Guthrie, for instance, is creating the contemporary equivalent of the pulp noir of Jim Thompson or David Goodis but on the mean streets of Scottish cities. And Declan Burke creates, in Eightball Boogie, a hard-boiled, sharp-tongued (or smart-mouthed) "research consultant" (part freelance reporter and part private detective) Harry Rigby, who lives in the northwest of Ireland (in a small city that seems to be Sligo, though it's never named). Harry, as a first-person narrator, is the wisecrack-laden voice at the heart of the book, and Burke walks a careful narrative line: The other characters speak in a less wise-ass and less allusive language, if occasionally almost as hard-boiled as Harry. The contrast foregrounds Harry's Marlowe-ish/Bogart-esque voice whose every phrase comments on the action, the scene, and the other characters, balanced by the self-aware tone of his voice and the comments from other characters (in the words of one of them, Harry watches too many movies). Those characters become a sort of Greek chorus commenting on both Harry and the novel itself, which along with Harry's own awareness of the depression or self-hatred explicitly lurking behind his smart mouth prevent the style from descending into parody. And when the story turns to Harry's estranged wife and their son, the smart talk recedes as the emotional depth increases, and it's this family drama that actually drives the story. Harry's own hard man facade is actually mostly just that--he keeps a .38 in his desk, but it turns out to be a replica, incapable of shooting anybody (as is Harry, though the violence he suffers and the threat to those he loves will push him beyond his limits). The arc of the story leading to that ending is a foot-race between Harry's tough-guy language and the circumstances that may turn his soft heart to stone. But most of the time, at least, Harry is almost as funny as he thinks he is, and the comedy keeps the story rolling along between the sudden eruptions of violence. If Harry's imitation of the voice of a hard-boiled private eye isn't your cup of tea, stick with the book anyway--Burke's novel is not just a pulp revival, it's genuine neo-noir.
Posted by Glenn Harper at 1:57 PM