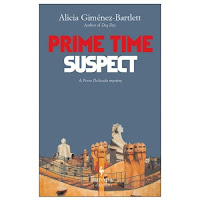 Prime Time Suspect is Alicia Giménez-Bartlett's second novel to be brought out in English translation by the excellent Europa Editions press. The story includes a dysfunctional pair of cop partners, their dispeptic boss, a murdered gossip journalist, and a host of lowlifes (some of them in high places): all the elements of classic noir. Except that the tone is quite different. Petra Delicado is the lead detective in the case and the narrator of the novel. Her voice is as digressive as the method of her investigation--irresistably leading to an analogy with the architectural fantasies of Gaudi (as illustrated on the novel's cover)--though half the novel takes place in Madrid rather than Gaudi's (and Petra's) Barcelona. The meandering lines of Gaudi's architecture is a visual equivalent of the indirect narrative of Giménez-Bartlett's novels. But Petra is not as interested in food as that other first-person (and also meandering) detective, Pepe Carvalho (star of the Vazquez Montalban books, in which a substantial portion of the story involves Pepe's current meal). A good deal of what would be the "action" in a genre novel is off stage here, with the focus remaining on Petra's thoughts, attitudes, and relationships with her sister and her partner. The result is that while there's plenty of murder, there's not much bloody violence at the forefront of the narrative. That's not a disadvantage--Petra is a distinctive character and an atypical cop. Plus there's an interesting contrast (true or not) between the style of the Madrid murder squad and Petra's own Barcelona squad (led by her perpetually irritated boss). It's Petra, though, that keeps the novels lively and interesting, not the action or the plot. Her voice is frequently depressed (about her private life more than her cases), but she's like a friend that you like so well that you gladly put up with her moaning (or her departures from the expectations of the noir or policier novel).
Posted by Glenn Harper at 7:03 PM