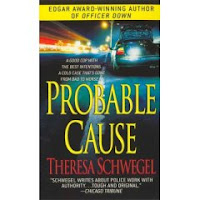 While I've been waiting for some new crime novels from Italy, Scandinavia, and elsewhere, I've finished a couple of big books that are only sort-of crime fiction as well as the first two of Theresa Schwegel's police novels (I'm waiting for the 3rd one, which promises to be her best so far). The big books are Vikram Chandra's Sacred Games (the police detective and the gangster are surrogates for bigger issues that finally bring the twin narratives together at the end--a very good novel, but be prepared for a long haul if you start on it) and Gentlemen, by Klas Östergren (which claims to be part thriller and part spy story, but is actually a meandering satire about Sweden in the '70s--an interesting excursion of you're interested in Swedish culture and literature, but not a crime novel at all). Schwegel's books are interesting in several respects: most crime novels are about detectives or civilians rather than uniformed cops, which is Schwegel's "beat." Her books resemble Wambaugh's or those of John Westermann (whose Long Island cop stories are better than the reviews on Amazon would indicate). Schwegel's tales are also set in the North Chicago neighborhoods where I once lived, an extra bonus. Her stories are cynical (or realistic, if you wish) and involving--bringing the daily dilemmas of working police to the forefront (instead of serial killers or human trafficking or the other standard fare of the run-of-the-mill police novel in the U.S. I'll report on her new Person of Interest when I get hold of it. In the meantime, I'm finally catching up with the much-reviewed and highly recommended Broken Shore by Australia's Peter Temple--more on that later.
Posted by Glenn Harper at 12:15 PM

Interesting -- and I am looking forward to your review of the Peter Temple book.
Have you got hold of a copy of Steig Larsson's "Girl with the Dragon Tattoo" yet? I read it over Christmas and enjoyed it. Would also enjoy reading your thoughts on it.

It was this post which led me to buy und read Schwegels "Probable Cause". What a disappointment; her writing isn't even so bad, but it is a awkward book full of clichés and skewed plot constructions.

Krilileser: Sorry about the recommendation steering you the wrong way. Maybe I was seduced by the setting, nearby where I used to live. But tastes in crime fiction are as varied as tastes for anything else, and I'm only one (possibly narrow) point of view...
Thanks,
Glenn

Glenn, no real harm done. Schwegel was for a while on my radar and you told me just what I wanted to hear. If not you someone else would have. I was a bit disappointed because I have a lot of (hopefully) good books waiting.

I wonder about this lithuanian- polish connection and whether it's plausible. The migrants from Lithuania would most likely speak Lithuanian (about 90% do and there was the change to the female form of the family name after the marriage). But it seemed as though they didn't have any problems with polish. It could be possible I guess because many people in Lithuania speak more than one language, but still: Schwegel should have explained.

I absolutely agree about the Lithuanian explanation, Krimileser--and that's an insight that I am grateful to you for (not something I would catch). Those details are something that blogs and conversations are great for (plus maybe it will keep writers on their toes about those details).
Thanks,
Glenn

It is not really important and usually I wouldn't bother. But I wonder why no one checked her reference to "Der Kommissar", obviously by Falco, popular at that time in Europe and the US.

If you use Google.com (and not Google.de) and search for "Der Kommissar" you find a lot of links (The video on YouTube and so forth) . But Schwegel wrote "Der Komisar". Use Google.com and you get "Did you mean: 'Der Kommissar'".

Just wondering about the attitude and whether the reference was lost to the editorial staff.