The end of the Havana Quartet 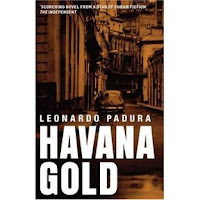 Havana Gold is the last of Leonardo Padura's tetralogy-plus-one of novels about Havana detective Mario Conde, the Count. Actually the books are as much about Havana as about the detective or the crimes he investigates. In my limited acquaintance with Cuban literature, no one evokes that city in so poetic and evocative a way since G. Cabrera Infante (who was an emigre, while Padura has remained in his native city). Havana Gold is the last published but the second in the tetralogy (the fifth novel, Adios Hemingway, was an addendum featuring the same character but not a continuation of the series). As usual, the third person narration is interrupted by other voices, and there are metafictional elements (Conde proposes to write a novel about his current situation and call it Havana Gold (that's the translation, I'm sure the original novel uses its own Spanish title), plus when Conde is looking for something to read (while longing for his new girlfriend) the only book that appeals bears the title of Padura's obscure first novel. Padura's books resemble the Brazilian series by Luiz Alfredo Garcia-Roza (which evokes Rio in a similar way, as well as having the meandering plots that characterize Padura's novels), But in a way a more apt comparison is to the detective novels of Yasmina Khadra, in that both are dealing with a threatened regime (Algeria threatened by a government that denies its citizens basic human rights and insurgent Islamic fundamentalists, Cuba's by U.S. embargo and its own clinging-to-communism-and-revolution regime). Khadra's detective is also a writer, though already a succesful one, while Conde remains a writer manque. Neither Khadra nor Padura have any optimism about their societies, though Padura is both more emotionally attached at least to his city and is less overtly political than Khadra. What is distinctive about Padura's detective novels is a pervading melancholy of nostalgia--not a nostalgia for a lost golden age, but for the loss of youthful dreams (not only Conde but all his friends have settled for less than seemed possible in their schooldays at the Pre-Uni that figures largely in this novel). Havana Gold finds Conde caught between two women, one a murdered teacher with an ambiguous reputation, the other a beautiful woman who mysteriously appears in Conde's path, needing her car's tire changed (the car itself being a mark of her position in Cuban society). Conde manages to solve the case of the murdered woman (not by ratiocination but by doggedly following leads and instincts). But the "case" of the mysterious woman leads him down his often-traveled path from love to loss. Not that he doesn't manage some consolation (from sex, from the cooking of his friend Skinny Carlos's mother, and from a tentative dedication to the job to which he is dedicated, without ever quite being a "real cop" or even a real adult (along with his nostalgia for lost youth there is much of the aged adolescent about Conde, with his penchant for picking fights, among other juvenile traits). It is Padura's strength that he achieves much poetry and truth with his flawed characters and within the structure of the crime novel.
Posted by Glenn Harper at 4:41 PM