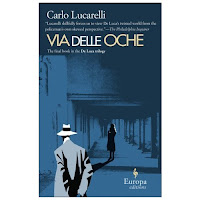 The last installment in Carlo Lucarelli's De Luca trilogy is out in English translation, and as glad as I am to have a chance to read it, I regret that this is indeed the last installment. The De Luca novels are short, swift incarnations of a swiftly changing era in modern Italy, the end of the war, the partisan control of the countryside, and the post-war elections (which set the tone for much of Italian history since that time). De Luca is in part a portrait of an actual detective that Lucarelli met while doing academic research (the actual encounter is outlined in a preface that accompanies each of the De Luca novels). The real cop served the fascist government, the partisan resistance, and the post-war government without seeing any contradiction in his shifting loyalties. De Luca, on the other hand, can't eat, can't sleep, and is constantly threatened in this last installment with the consequences of his association with the political police of the former fascist government. In a series of short chapters introduced by headlines from contemporary newspapers, De Luca investigates an apparent suicide in Bologna that leads to the legal brothels of that city. We find out a great deal about the brothel business and about the complex and violent politics of those years (communist, nationalist, Christian Democrat). De Luca tries to operate simply as a cop, without reference or preference regarding the politics in the streets and within the police, but he is stymied at every turn. It is to Lucarelli's credit that though the specific references to politicians and parties unknown to a foreign reader who is not an expert in Italin history, the events and difficulties that De Luca lives through are ultimately clear (as clear as they are to the obstinate and unaffiliated detective, at least). The solution to the mystery is hardly the point, it is De Luca's own plight and his dogged attempt to fight the attempts to keep him from investigating that carry the story forward, as well as the beautifully drawn portrait of Bologna and Italy in a complex and troubled time. I'm tempted to go back and read the trilogy again, as a single novel (and even all three don't add up to the length of some contemporary crime novels), but each of the 3 books is really self-contained, a snapshot of a distinct slice of society and time, in Rome, the countryside, and Bologna, under the shifting political realities. And De Luca doesn't really develop as a character through the series: he is in fact curiously opaque and uninvolved. He is a device, though a fully human one, that casts a light on his surroundings and reveals the truth without revealing much of himself. His inability to sleep or eat (and his consequent drowsiness and stomach pains) are less character traits than metaphors for a person and a people stressed and strung out by the effort of remaining human in inhuman times. Not that the stories are heavy with metaphor and dread: there is considerable humor surrounding the humorless De Luca, and considerable humanity. The books are terse jewels of crime fiction, and are entirely different from Lucarelli's other novels in translation (which are excellent in an entirely different, perhaps more cinematic, way).
Posted by Glenn Harper at 2:38 PM

Aren't the De Luca books wonderful? I would not hesitate to use them in a class on 20th-century European history.

It's been a while since I read the first two novels, but it seemed to me Lucaralli was both a bit more relaxed in this one, and somewhat more willing to let De Luca be a son of a bitch when he had to.
==============
Detectives Beyond Borders
"Because Murder Is More Fun Away From Home"
http://www.detectivesbeyondborders.blogspot.com/