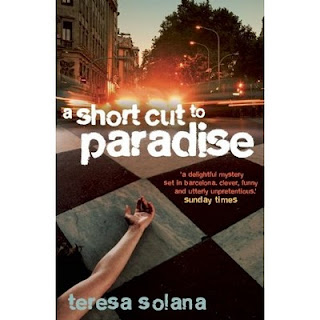 Teresa Solana's new novel featuring unlicensed detective twin brothers Pep (or Borja, his alter ego) and Eduard carries forward the satirical style of her first novel, A Not So Perfect Crime, as well as the tantalizing view of everyday life in Barcelona (among both the high and the low of Catalan society), along with a plot that is a bit more of a puzzle mystery than in the first novel. But Pep and Eduard are no brilliant crime-solvers: they have to pay (bribe, almost) a retired cop to solve the mystery for them. The pleasure, indeed, is not the solving of the crime as much as the comic twists and turns along the way.

At numerous points, A Shortcut to Paradise (translated by Peter Bush from the original Catalan) made me think of the early novels of Evelyn Waugh. In particular, a chapter on one character's prison experience and another character's ultimate fate are reminiscent of the cruel farce of Waugh's satires. There's also a wild party that spirals out of control.

Solana also provides much comedy based on the literary scene of Barcelona, apparently (given the disclaimer at the end) pointed at specific targets. But as a reader unfamiliar with those real-life literati, I can attest that the comedy carries through without knowing the references. There's also some literary comedy concerning the literary value of certain kinds of writing, culminating in a final, extended joke regarding the fate of a posthumous manuscript.

But as with Eduard and Pep's first outing, a lot of the pleasure in reading the book comes from spending time with the disarmingly normal detectives, muggers, murderers, and falsely accused throughout the book, viewed through Eduard's first-person narrative and through third-person glimpses into the lives of others in the story.

I hope Solana keeps up this wonderful series: further comic and criminal forays into Barcelona life, and further installments in the brothers' lives (Eduard striving for an ordinary middle-class life and Borja dreaming of nobility, sort of) would be most welcome.
Posted by Glenn Harper at 12:29 PM

Glenn, I'm always afraid that some books are difficult to translate and maybe the expectations with Solana's first book were too high. So I'm also glad that the translation has done its job in this case and that you have enjoyed the book.