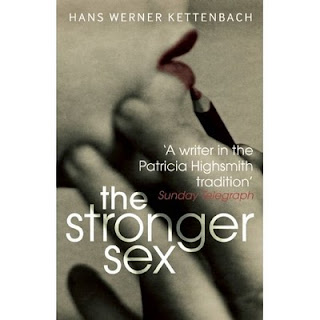 The Stronger Sex, newly published in English translation (done by Anthea Bell) by crime fiction publisher Bitter Lemon Press, isn't really a crime novel, or even a thriller, despite including a private detective, a race track, a mysterious older woman and a young lover, a young lawyer thrust into a difficult case without knowing the consequences, and so on. But the case deals with an accusation that an employer has dismissed a worker improperly: a woman working for a despotic entrepreneur asks for time off, and when refused, she takes sick leave. When the employer fires her without notice, she sues under German workers' rights laws and the case is set to come before a special employment tribunal.

Young attorney Alexander Zabel is assigned to defend the employer, Herbert Klofft, in the case by his boss, who is a friend of Klofft's. Most of the novel is Zabel's first-person puzzlement over how to proceed in the case, mixed with his on-again-off-again relationship with an attractive art critic, his fascination with the sexy-but-seventy Cilly Klofft, the defendant's wife, and his alternating sympathy and repulsion with regard to the difficult but very ill Kofft.

The blurbs accompanying the book suggest a similarity to Patricia Highsmith, which is indeed a valid comment—but it's to Highsmith's tightly wound but quieter novels, rather than the Ripley books. For me, the relationship of Zabel and Cilly was the most interesting element in what is a noir story but one whose violence is for the most part emotional and psychological rather than physical or blatant.

In fact, The Stronger Sex reminds me, in retrospect, of a short story rather than a novel, a very long story (342 pages, but more of a meditation centering on a minor incident rather than working with a bigger subject or a more complex plot. Of the three Bitter Lemon books by Kettenbach, David's Story and Black Ice, I found The Stronger Sex to be the most interesting and the most readable, though the furthest of the three from any conventional aspects of crime fiction. In some ways it reminds me o the recent novels by Peter Temple (Truth in particular), though it is much further from the rules and structures of the detective story or mystery novel than Temple's books—it's the concentration on character and situation and voice that I was reminded of in reading Kettenbach.

So: It's a bit of Temple, a bit of Hollywood (or even London) Boulevard, a bit if Highsmith, and a bit of mainstream fiction. I recommend it if you're in the mood for something quite different.
Posted by Glenn Harper at 12:28 PM

It sounds intriguing! I must check it out. Thanks for reviewing it as I admit I probably would not have looked into this book on the basis of the title or possibly the blurb description.