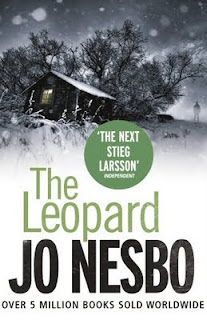 The eagerly awaited sequel to Jo Nesbø's previous Harry Hole novel (The Snowman) has arrived in English (translated by Don Bartlett). The first question that the book raises is "serial-killer-porn," because of the manner of death of the earliest and some other victims of an unknown killer who ultimately becomes known as "Prince Charming": a torture device with interesting links to the colonial excesses of Europe's African adventures: a device whose lethal power is described at length at the beginning of the novel.

I can't pretend to present any illumination for the sadistic aspects of most serial killer fiction, or Nesbø's particular use of the trope, but I can reassure potential readers that the viciousness of the early passages of The Leopard do not make up the largest part of the novel. If the sadism had continued, it would have been difficult to continue with what is overall a very well written, well constructed crime novel, fully on par with Nesbø's best work. 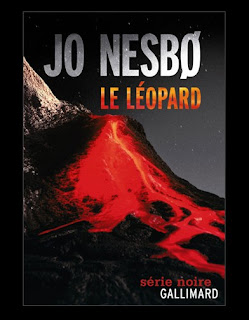 What does make up most of the story is Nesbø's talent for deploying the usual elements of crime fiction and then undermining and twisting them, so that the reader is continually kept off balance. Throughout the books over 600 pages, an easy or typical resolution looms at the edges only to disappear with a surprising turn of events. Through this process and through Nesbø's writing, the reader is fully engaged in this very long police procedural.

Harry has hit bottom in Hong Kong, where he fled after the traumatic events of The Snowman (a story that haunts this book). He is pulled back to Oslo unwillingly, as a new serial killer is on the loose and the Crime Squad is in disarray, threatened with losing its access to murder inquiries by police politics (the creation of a new national "major case" unit) and by the ruthless ambition of another of Nesbø's complex, ambitious policeme bureaucrats, Mikael Bellman. 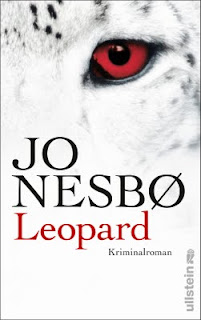 The story includes a couple of passages that stretch credulity a bit (including the aftermath of an avalanche, though what do I know about escaping from an avalanche...). But the story pulled me along strongly enough that I've been toting around this large, heavy hardback all week.

Concerning the covers: I'm pasting in the U.S., French, and German versions. The U.S. is probably the weakest graphically, but has the most to do with the actual plot—but the American version is marred by the predictable but irritating "next Stieg Larsson" nonsense.
Posted by Glenn Harper at 1:31 PM

Thanks for your review, and for saying that the sadism at the start does not continue throughout. Otherwise, that would be tough for readers.

I like the cover with the leopard's face. It's quite dramatic and pulls one in to find out about the mystery of the leopard.

Nesbo is a terrific crime fiction writer, causing many a reader to stay up all night, even if one works the next day, to think about the plot twists constantly and to discuss all of this with other readers ad infinitum.

Sorry to post on a different subject, but I'm hoping to send you something for review.

Dirty Old Town has been reviewed by EuroCrime very favourably and there have been great reviews elsewhere, too.

Is it possible for you to send me a contact link so that I can send you a review copy?

Thanks for your time and again, sorry for interrupting the flow.

The three covers are interesting. The UK cover, while a scandinavian crime fic cliche, does fit the book pretty well - if only it weren't for that grossly insulting sticker! The volcano cover is OK but only refers to one event in the book. The animal cover- striking but not relevant - as the title did not refer to an animal leopard.