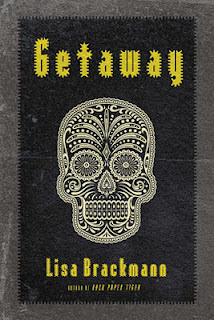 Getaway, the second thriller from Lisa Brackmann, is the kind of book that Eric Ambler used to do so well, an ordinary person caught up in extraordinary events and forces way beyond his job description. Except that instead of spies and international intrigue, Michelle Mason is caught up in something she isn't able to figure out at all. Is it police corruption, drug gangs, the CIA, or something even stranger?

Michelle's husband killed himself, after revealing that he has been keeping secret from her the impending financial disaster that is about to engulf her life. She escapes her woes with a brief trip from Los Angeles, where she's now homeless, to Puerto Vallarta on Mexico's west coast for a last getaway before the reality of her new life sets in. A chance encounter with an attractive man and several margaritas on the beach leads to her hotel room, unwelcome night visitors, and ultimately to jail and the loss of her passport.

The mysterious Daniel (from the beach) disappears and an even more mysterious Gary appears, saving her from jail but proposing a devil's bargain: he'll help her, even pay off her overextended credit cards, if she contacts Daniel and keeps tabs on him. He won't say who he is, who Daniel is, or what's going on. What ensues is a puzzling series of encounters (violent and not) as Michelle spirals down into murky waters, including glimpses into horrific violence and horrible poverty, as well as the life of rich and not-so-rich locals and emigre Americans who are more or less permanent Puerto Vallarta residents.

Getaway is a faster ride than Brackmann's previous Rock Paper Tiger, with clearer threats and more violence, but it has some of the earlier books twisty indirection. Michelle is likable and pleasant for a reader to spend some time with, but she keeps stepping in it rather than getting her problems sorted out. To give her her due, she shows her nerve when it's called for and she has no way to know who to trust: the biggest threat in a very threatening atmosphere is her status as an isolated foreigner whose bubble of tourist-untouchability has been totally shattered.

Though the atmosphere and setting of Rock Paper Tiger were more exotic, and more up-to-date concerning art and technology, Getaway was for me a more convincing book, pulling me along with the story in a more compelling way, with more tangible threats and consequences coming down upon Michelle and other characters along the way. Not to give anything away, but the ending fulfills several strands of the book without totally wrapping up others. It almost suggests the ending of the Tony Scott film, veering off into a half-fairy tale, half metafictional other world: Getaway's ending is more believable than that of True Romance, but it's open-ended and contains elements of wish-fulfillment in the same sort of way.

Altogether, Getaway, due from Soho Press in May, is an interesting and entertaining update on the damsel-in-distress story (from the damsel's point of view) as well as the Ambler-esque spy thriller.
Posted by Glenn Harper at 1:17 PM

Nice review, seems like a great book and puerto vallarta it's a really inexpected destination for a noir novell