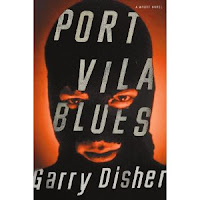 On the heels of Australian author Garry Disher's new Wyatt novel, titled Wyatt appropriately enough, Soho Crime is bringing out the 1996 Wyatt novel, Port Vila Blues, in the U.S. for the first time. For fans of dark, straight-ahead noir from the '40s to Donald Westlake, Port Vila Blues will be most welcome. Wyatt is extremely capable in his chosen profession (thief), but his talents (planning, patience, etc.) are supplemented by luck of both the good and bad variety. 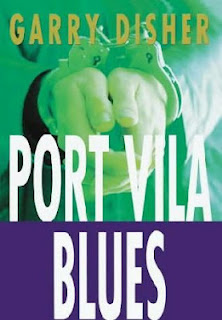 One of the pleasures of the Wyatt series is the combination of character and plot. The secondary characters are all vivid and fully realized, and the reader will frequently find him or herself predicting how they will function in the plot as the story progresses--but Disher is very likely to undercut those expectations. His stories don't so much mesh like clockwork as veer realistically toward a common future point (an approach to plotting that he shares with, for example, Elmore Leonard or the aforementioned Westlake).

Wyatt himself is a cipher, even to the reader who is privy to his inner life (offered to us through Disher's omniscent narrator. We often know the secondary characters (those against whom Wyatt is plotting or vice versa) more fully than we know Wyatt. But the reader gradually is able to piece together the trajectory of Wyatt's life, at least in broad strokes, to see how he reached the present.

Even not knowing that the novel was first published in 1996, there are many elements that suggest that the '90s is the time frame of the novel. No one is using cell phones, and Wyatt thinks back to the origins of his career in his service in the Vietnam War. Other characters histories are also traced in such a way to suggest that they've traversed about 20 years since the 1970s. An Australian reader may discover other cues to the time of the novel's action. But the most significant fact of the novel's time dimension is that Wyatt is finding his milieu much changed: he looks back on his earlier career as a different era, giving the story a sense of time having passed, situations having changed.

Wyatt in this book begins with a well-planned robbery, based on information derived by his long-time partner (now very ill). Besides the money he expects to find in the safe of a politician's house there is something extra, a "lagniappe" that initiates a chain of events that will take Wyatt and the rest of the cast (mostly men, but with one very interesting female character) from Australia to the city of the novel's title, on the Melanesian island of Vanuatu. It's a lively ride, with a satisfying conclusion that drifts on beyond the last page.

Of the two covers reproduced here, the top one is the new Soho Crime one, and the lower one is, I think, an earlier, Australian edition. I have to say I like the older one better, though both do capture something of the stark, noir atmosphere of the story.
Posted by Glenn Harper at 12:38 PM