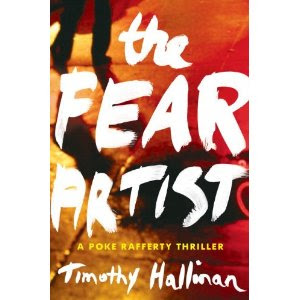 I've read several crime novels lately that are based on the lingering effects of U.S. policies in Southeast Asia, including the last of Colin Cotteril's Dr. Siri novels and the second of Jake Needham's Jack Shepherd books; the most recent is Timothy Hallinan's The Fear Artist, evidently the 11th novel featuring Poke Rafferty, a series that I had somehow missed up to now (and only noticed now because SoHo Crime sent me a review copy of the new book). Rafferty is a travel writer and long-time resident of Bangkok who seems to have a knack for stirring up trouble.

The U.S. (justifiably) doesn't come out looking very good in any of these three books. Needham's book is perhaps the most contemporary in its outlook, dealing with current policies and financial crimes whose origins are in the U.S. Cotteril's and Hallinan's books deal with the lingering spillover of the U.S. involvement in Vietnam into other countries in the region. Rafferty's book, though, has some of the same basic structure as Needham's (innocent bystander caught up in a high stakes mess not of his own making) but The Fear Artist is more of a conventional thriller in some ways. But with a twist, in terms of what the book's primary concern really is.

The basic elements are that Rafferty is out buying paint to redecorate his family's apartment when an American male crashes into him, dying in his arms, evidently shot by persons unknown. The dying man says three words and slips Rafferty a slip of paper, and he (Rafferty) is picked up by Thai security agents who demand to be told what the dying man told him. Rafferty discovers that there's a mysterious American behind the Thai interest in the affair, and suddenly Poke is on the run from the Thais and the American, who turns out to be Murphy, a ruthless former member of the notorious Phoenix Program and its crimes during the Vietnam War.

It's quite entertaining to watch Poke evade everyone with low-tech resources, some luck, and a friend in the police force, and the plot leads to the inevitable violent conclusion by a circuitous route that includes Poke's half sister, his own gangster father, some Vietnamese refugees, some Soviet-bloc spies more or less retired in Bangkok, an unusual femme fatale, and Murphy's bizarre extended family. Poke's plan to get out of the mess he didn't create strains credulity at some points, but the real point of the book is somewhere else.

There are lots of parallels in the book, not to mention the impending flooding of the city: There are no less than 4 young girls at the margins of society, three of them practically feral children and the fourth (Rafferty's half sister) raised, it seems, in a Chinese gang. There are parents struggling to protect their children (Poke and his wife having adopted a street child, as well as rescuing another young woman from the streets to take care of their policeman friend after his wife dies, plus Murphy's damaged daughter whose sociopathic, nearly feral tendencies have been developed rather than suppressed by her father, and refugees still suffering from war crimes.

In the end, parents struggling with their responsibilities to their daughters is the real theme of the book. Rafferty's relationship with his daughter is a fairly conventional struggle with a teenager, but Murphy's is twisted and strange and in fact, Treasure (the daughter) is a fascinating character that we don't really get to know well enough. Murphy and Treasure are a creepy mirror of Rafferty and his daughter, a structure that's very interesting in a crime novel. Pim, the former child prostitute who has become the friendly cop's housekeeper is another very interesting character, who flees from the cop's house back into the streets when that femme fatale I mentioned comes into his life). It's that triangle, Pim, the cop, and the femme fatale, that provides an ambiguous cliffhanger at the end.

While I lost a bit of confidence in the plot when Rafferty goes after Murphy, the story never descends into amateur-turned-superspy territory (thankfully), and the other aspects of the book are compelling enough to pull the reader totally in. Id appreciate any comments on the earlier novels in the series. In my experience, starting with the 11th isn't a problem because Hallinan does a good job of letting the reader know what's important about what's gone before without recapping unnecessary detail, does the series as a whole hold up well enough to send a reader like me back to the beginning?

It's actually not the 11th in this series, it's the ... um, fifth? I think. Nail Through the Heart, Fourth Watcher, Breathing Water, and the Queen of Patpong. I love this series, and recommend it highly. This book deals less than the others with Rafferty's invented family, who are mostly off stage in this one, but it is the creation and unfurling of each member of this family that is what the series is largely about. His writing is stylish and his Thai settings are great, but the characters are particularly rich.

Having spent two years in the City of Angels, i have much enjoyed Hallinan's books. The city is indeed a mystery itself, a strange mixture of the Orient and cowboy capitalism. Hallinan managed to capture that in his books. A hero who is neither a policeman nor a private detective (as with Burdett and Morre, both of whom place their mysteries in Bangkok) gives the book a reality twist. The compassionate view of the Thai sex trade is less humorous that Burdett, less shocking than Moore. And yes, this is the fifth not the 11th book in this series.

I read Nail Through the Heart because of this review and really enjoyed it. As a fan of Burdett and Cotterill, this was a great addition. Thanks.