No Sale, by Patrick Conrad 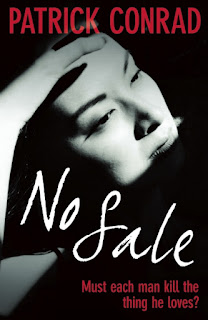 Patrick Conrad's No Sale, translated from the original Dutch by Jonathan Lynn, is set in Belgium, mostly in Antwerp, but it's real venue is the silver screen. Victor Cox is a professor of film studies, specializing in film noir, on the verge of retirement when his estranged wife is killed by a hit-and-run driver and dumped into the water along the docks. Two policemen, Lannoy and Luyckx (the latter known as the Sponge) suspect the professor and, as murders accumulate, continue to meet and interrogate Cox throughout the novel.

The murders seem random but Cox increasingly suspects that they are planned to coincide with the plots of noir films or the lives of actresses who starred in them or women whose lives were the sources for movie plots. Because the professor sees life mostly through the lens of the cinema (mostly, but not exclusively, American movies), the reader will hear a lot about film history even beyond the plots that coincide with the murders. Film noir is, indeed, not only the setting but the subject of the book.

Lannoy and the Sponge occupy one level of the narrative, and the professor and his diaristic musings form another. Every murdered woman seems to have some connection to Cox, but as several years pass, there's no evidence to link him to the killings. Then, as his involvement with a young student grows, the professor begins to lose the distinction between his waking life, his dreams, and the film noir plots he knows so well, the source of some confusion and much comedy. He even begins to suspect that he may have murdered the women while inhabiting an alter-ego.

The solution to the crime has a bit of a Nabokovian flair, and there is much local color along the way, in the noir-ish underworld of Antwerp as well as the fictional world of the cinema. The novel is clever and entertaining, more of a "meta-fiction" in a way than a straightforward story. But Conrad takes seriously his commitment to fiction and doesn't betray the reader's trust, the way some meta-fiction (and Nabokov, in fact) sometimes do.

No Sale (the English title comes from an incident in the movie Butterfield 8, while the original title was Starr, after one of the characters and her historical double) is another entry in Bitter Lemon's interesting and quite varied list of world crime fiction.
Posted by Glenn Harper at 12:34 PM