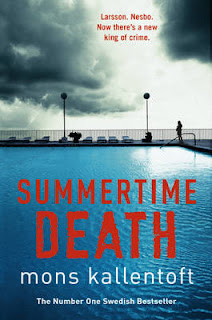 Summertime Death is the second in Mons Kallentoft's tetralogy featuring Malin Fors, a detective in the small Swedish city of Linköping. The setting of the first book, Midwinter Sacrifice, was ice cold, and this one is steamy and hot, but the books share a lot in terms of style. Both are interspersed with monologues by the murdered victims, a device that I find irritating and in this case also unnecessary. The dead people don't really advance the plot. Another stylistic quirk is the use of sentence fragments, something that I also find irritating if not done well, but Kallentoft mostly uses the fragmentary style in a positive way, to move the story rapidly along. Not to say that the story actually moves rapidly: the detectives in this case spend a lot of time spinning their wheels.

The focus on immigrants and homosexual women is bad enough, but the police turn a blind eye to the violent abuse by one of their own toward some of the suspects (particularly ones without the means to report the crimes against them). We needn't insist on so-called political correctness in our crime fiction, but the blithe acceptance of the abuse and prejudice on the part of the detectives is more akin to Mike Hammer novels than the usual Scandinavian fare.

The plot is pretty standard serial killer stuff: a young woman who is still alive and ultimately two who have been killed exhibit wounds linking them together clearly. We only meet the killer toward the end, but the killer's motivation is hinted at earlier. Malin's dogged pursuit of the truth leads the killer to target her own daughter, another over-used device, in my humble opinion.

As is sometimes the case with books that I find unsatisfying (and longer than they need to be), I found myself reading more and more quickly, seeking the positive aspects of the story (particularly the characters, who are mostly well-drawn and except for their prejudices and their blindness to prejudice and abuse among their colleagues, mostly sympathetic, and the small-town Swedish setting, which is well drawn and evocative). Other readers may find the interesting parts of the book to outweigh the annoying parts (or might even not be annoyed in the way that I was), but the best I can do is report my own reaction. I'm certainly open to alternative opinions--but one thing that can say with more objectivity is that Kallentoft does not approach the scope and style of the other very long Swedish novel that I read recently, Leif G.W. Persson's Linda, as in The Linda Murder, which also includes a lot of obnoxious attitudes and actions on the part of the police, but in a way that sets them into a context that is both satirical and socially aware.