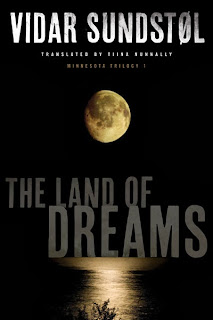 The Land of Dreams is a Norwegian novel by Vidar Sundstøl, dealing with a crime in Minnesota, on the shores of Lake Superior, the first of a "Minnesota Trilogy" by the author. This isn't the first time that a Scandinavian novelist has concentrated on America, emigration, and the U.S. Westward expansion: Vilhelm Moberg's Emigrant trilogy certainly deals with all of the above, from a Swedish perspective; and, to travel to even further shores, the Norwegian crime boom could be said to have kicked off with Jo Nesbø's first book, which puts his character Harry Hole in an Australian setting.

Sundstøl digs deeply into the culture of the area, juxtaposing Norwegian and Ojibway traditions in particular. There are considerable comic elements in his portrait of Norwegian-Americans, obsessed with their origins, embodied in the forest cop (who works for the U.S. Forest Service, mostly issuing tickets to non-Native-Americans trying to fish out of season), Lance Hansen. Lance's obsession with genealogy and local history irritates some of the locals (because he doesn't take their family stories at face value), and places him at the head of the author's near-parody of Minnesota Norwegians.

But Lance rises from comic to tragic figure when he faces a choice between family and duty, a track that begins with his discovery of two naked Norwegian travelers in the forest, both bloody, one dead and the other alive. For most of the novel, the surviving traveler is suspected of killing his friend (they're on a sort of bachelor's last chance canoeing trip before the deceased one was to have returned to Norway to be married). Lance isn't directly involved in the investigation, which is conducted by the FBI because the body was discovered on federal land, and we see the search for the killer mostly through the eyes of a Norwegian detective sent over to assist in the case (some of the puzzlement about Norwegian-Americans is also filtered through his point of view).

But in the process of mulling over the murder, Lance begins to investigate the hundred-year-old disappearance of a Native-American, a local legend that turns out to have some overlap with a legendary event in Lance's own family history. The confluence of the two stories will lead not only to the forest cop's ultimate dilemma, but also to a good deal of interesting discussion of Ojibway history and customs, and to some ghostly presences (if not outright ghosts) that appear from time to time.

The narrative is a bit repetitive, but not in an unreasonable way, since Lance is mulling over things as he twists his way into a knot. The reader is also pulled along by a sense that everything is going to come together in a difficult way for all concerned, as more is revealed about the Norwegians and their stay in the U.S. as well as the private revelations in Lance's own head. The small town setting is vividly evoked in all its positive as well as confining and comic aspects. This is not a sentimental portrait of Minnesota Americana, but neither is it a parody. And the dreams of the title are also a difficult milieu for all concerned (we are reminded that the Native American "dream catchers" so evident in tourist kitsch were actually intended to prevent nightmares from reaching the owner). I'm very interested to see how the rest of the trilogy will carry forward Lance's dilemma, and how Sundstøl will sustain the various juxtapositions and contraditions through two more novels.
Posted by Glenn Harper at 9:06 AM

I enjoyed it very much, too, and actually know the locations well enough to report that the author really knows that part of Minnesota and gets it right. (I live in a much more southern part of the state.)