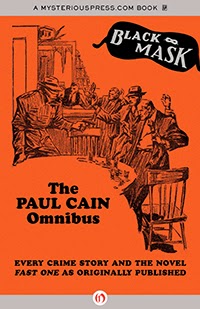 All in all, the Cain Omnibus is a lively portrait of an era as well as a shining example of the basic elements of noir without any fluff or compromise. Plus they're crackling stories that move ahead so rapidly that any one of these brief stories has enough going on to fill out a movie version (and the exteriority of the telling plus the speed of the plots suggests film writing--but they're clearly products of the pulp magazine era (even Fast One) and as much as they reflect the standards and language of noir, they also hark back to a specific era of publishing and reading. It's a very interesting collection, for anyone interested in the history of crime fiction as well as anyone who appreciates stripped-down storytelling.
Posted by Glenn Harper at 1:45 PM

I've long thought that Fast One is the closes thing to The Glass that the pulp era gave us. Cain wasn't Hammett--no one but Hammett was that--but how many other crime writers of the early '30s read as if they could have been writing in the '6os pr '70s?