An Event in Autumn: not the final Wallander but the last to reach us 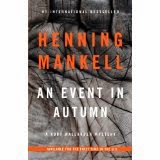 Henning Mankell's Wallander saga has ended, with the final novel (A Troubled Man) and the final 6 episodes of the Swedish TV series, which extends the melancholy ending of A Troubled Man in an even more melancholy way, with new cases and new insights into the Ystad detective's last days. But a "new" Wallander story has finally arrived in English: actually a novella originally written for a Dutch book promotion, which offered free short books to crime fiction buyers in a specific month. In the chronology of the series, the story falls after Before the Frost: Linda Wallander is a police officer in Ystad, living with her father for the time being in his Ystad apartment. The novella was filmed as part of the British Wallander series with Kenneth Branagh in the leading role.

What will come later in the series is foreshadowed (Wallander is looking for a house in the country, thinking of getting a dog, worrying about getting older), but this moment in his personal autumn has its own interests as well. The relationship with Linda is clearer here than anywhere else in the book series (somewhat different, though recognizable, from the relationship between the detective and his daughter in the three filmed versions of the stories), and the fact that they are constantly irritating one another has begun to take on a slightly comic character. Previously, one might have wondered why they bothered to stay in touch, family ties notwithstanding, but here the affection between them clearly underlies their spiky interactions.

The case relates to an unfortunate discovery in the garden of a house that Martinsson (Wallander's long-standing right-hand man) has suggested Wallander think about purchasing as his house in the country. In an almost subliminal moment, the detective uncovers a skeletal hand sticking out of the earth. What follows is a pure police procedural, as the investigative team works through the old mystery without much hope of finding a solution. There are false leads, and leads that seem dead ends but turn out to be productive. And there is a brief confrontation with death (not quite an "exciting conclusion") as the solution is achieved.

The usual cast of characters is present, each exhibiting his/her personal characteristics as well as a specific role in the series and the investigation, and while it's a short book, the laconic style and very personal and rounded characters (detectives, witnesses, and suspects alike) that we know from the longer books are very much in evidence. In fact, the very "dailiness" and ordinary nature of the crime are more interesting to me than some of the more global and conspiratorial plots of some of the full novels. Thanks are due to translator Laurie Thompson and publisher Vintage Crime/Black Lizard for making the story accessible to we Anglophones.
Posted by Glenn Harper at 7:49 AM