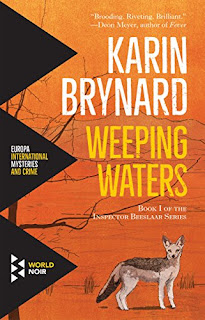 There is a violent murder (and references to even more violent murders, white supremacist preachers and farmers,  there's traditional culture and history, and there are the murder victim's haunting paintings. The central characters include the cop, the victim's journalist sister, the victim's farm-manager (of indigenous background), and various other cops, farmers, devvelopers, farmhands, and others. The story can be repetitive, but never drags: the repetitive elements spiral toward a violent conclusion that highlights the country's struggles with inequality, history, and rapidly changing society afte rthe fall of apartheid. Of the substantial number of crime writers in the new South Africa, Brynard is one of the most ambitious in scope, but her style is straightforward, always focused on the reality of the characters' lives.
Posted by Glenn Harper at 7:07 PM