William McIlvanney and Ian Rankin: The last Laidlaw (and the first)

William McIlvanney's three novels featuring detective Jack Laidlaw.Laidlaw (1977), The Papers of Tony Veitch (1981), an Strange Loyalties (1991) are not only the foundation of Tartan Noir but distinctive and atmospheric additions to the crime novel as a genre. McIlvanney died in 2015, left an unfinished Laidlaw novel, a prequel to the earlier trilogy, and Ian Rankin (the other most prominent Scottish crime writer) has now finished the  book, released as The Dark Remains by Europa Editioons in their World Noir series. 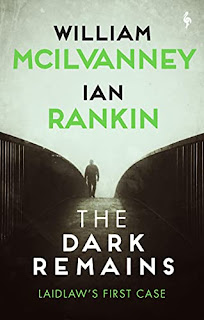 This is not so much a "young Laidlaw" sort of thing: instead, Laidlaw has arrived in a new post but is aleady fully formed as a contrary cop with methods that constantly clash with his superiors. The gangsters who populate the original trilogy are also here, in an earlier stage of the conflict among them as they establish their territories in Glasgow. The narrativev voice is also consistent with the other  books: Rankin is definitely channeling McIlvanney''s voice, I couldn't tell where the one left off and the other started. The plotting is also very McIlvanney, twisting through the gangland disputes and police assumptions until a final revelation that the outsider Laidlaw is the only one able to reveal.

Because Laidlaw would rather be on the street than in the station, we get a vivid view of a Glasgow that once was, from the dark interior to the lush suburbs. Laidlaw takes buses rather than police cars, a lot of the time, and the panoramic view of the city is enthralling. The book

The Dark Remains is a marvel of quirky, witty prose (much like Laidlaw himself). Laidlaw leaves books by foreign philosophers on his desk in the station, but he keeps them handy not because he frequently refers to them: rather they are props to reinforce his persona as the odd man out, so that the other cops will leave him alone with his thoughts. His one friend (or almost friend) makes some attempt to understand him but Laidlaw keeps even him at a distance. For that matter, he also keeps his wife at a distance: when on a case, he prefers to stay in a low-rent hotel in the city rather than return to his home on the periphery, partly to stay close to the case and the streets, partly not to stay close to his wife. He loves his kids, but his dedication to eh job has severly strained his marriage (a prominent factor in the trilogy as well).

The novel is funny, philosophical, gritty, dark, and very deep in its portrayal of human interactions and failings. There is considerable violence (mostly just off[-stage) and even more threats and implications of violence. The gangsters are fully human, but there is not a "heart of gold" among them: This is noir territory, nothing cozy about Laidlaw's Glasgow. If you haven't read McIlvanney, you could start with this wonderful "prequel" in collaboration with Rankin or with the triogy: one way or the other, I encourage you to experience McIlvanney's deep and involving exploration of Glasgow and of the literary possibilities of noir.