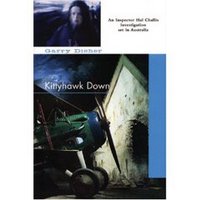 Garry Disher has evidently published a number of novels in Australia, including some crime novels yet to be published in the U.S. His two procedurals published stateside so far, Dragon Man and Kittyhawk Down, combine an ensemble cast a la McBain's 87th Precinct with redneck noir a la Danlel Woodrell's Arkansas noir novels. Kittyhawk Down, published recently, mines the redneck noir vein very effectively, with side plots that are very dark and very violent, though with a comic sensibility. The main narrative threads, featuring homicide detective Hal Challis plus a couple of female cops and a couple of male cops, are as much taken up with the trials of the cops' personal lives as the murders they are investigating. The splintered focus and diverse plots of these procedurals are very effective and entertaining, if you like McBain, Sjowall/Wahloo, etc. And if you like Woodrell (or Scott Phillips for that matter) the country town aspect of Disher's "peninsula" setting is vivid and enjoyable. Altogether worth the trip, and there's evidently at least one more in this series headed for U.S. publication. Speaking of Australia, the Shane Maloney novels, of which there are five now, I think (only 4 published in the U.S.) are very effective urban/comic/political novels. Maloney's portrait of local politics in Australia is very sharp. Of the presumably numerous Australian crime novels, only a few others have made into the noir lists of U.S. publishers. There are a couple of John Dale novels dealing with the urban underworld (very deep in the underworld), plus Caroline Shaw (whose Cat Catcher was published by Serpent's Tail some years ago). Shaw's detective is one of those almost-amateur female detectives that the English do so many of, but this Australian variant is a bit darker and grittier, plus the animal angle is handles without the cuteness of so many U.K. or U.S. cat-related mysteries (Shaw's detective specializes in finding pets, and only tangentially in human investigations). More Aussies out there in the world of noir? Let me know, please.
Posted by Glenn Harper at 11:16 AM