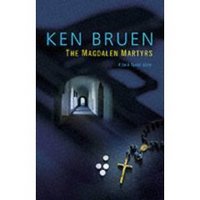 Ken Bruen's newest Jack Taylor novel is The Magdalen Martyrs, and illustrates the attractions and some of the limitations of his version of noir fiction. Bruen's current series has some peculiar qualities, not the least of which is his tendency to quote other writers in the historical and contemporary noir genre. But his own writing is more Charles Bukowsky than James M. Cain, and in the tradition of Bukowsy, the narrative voice can be fascinating and bleakly poetic. Jack Armstrong is a very self-conscious boozer and druggie, a loser who frequently brings grief to those he loves (or even just associates with). I keep stating that from my point of view, noir writing has to have a social conscience to really qualify as noir, and Bruen's Jack Taylor is really too self-absorbed to reflect consciously on his environment in any effective way, and Bruen's writing is itself too self-absorbed to bring any social consciousness into the narrative at the authorial level. The attempt to link the narrative to the horror of the Magdalen martyrs, enslaved by nuns in Galway in the early and mid-20th century, is the weakest part of the novel Bruen names for them. Bruen's earlier "White Trilogy" was much more in the noir/police procedural vein, and both very dark and very effective in drawing a portrait of contemporary London and (tangentially) Ireland. Bruen's earlier work is interesting but wildly uneven: Rilke on Black is a tantalizing literary take on crime fiction and the literature of the underworld, sending me out looking for other Bruen novels. But Hackman Blues and Her Last Call to Louis MacNeice were disappointing. Bruen seems to be a text machine, churning out novels quickly and giving the impression of not planning or editing much. The considerable charm of the Taylor novels lies principally in the flow of the narrator's voice, and not in the plot or structure. A much more richly constructed version of Irish noir can be found in M.S. Power's Children of the North, a kaleidoscopic trilogy on the so-called Troubles in the recent history of Belfast and Northern Ireland. At times, Children of the North reminded me in its complexity and skeptical intelligence of Ford Maddox Ford's great No More Parades, but in a very contemporary vein and with a rich sense of the tragedy and comedy of recent events in Ireland (and like another novel on the troubles, The Psalm Killer by Christopher Petit, the more you look into actual events, the novels have an eerie quality of being both actual news and prescient clairvoyance). Power's other novels, such as I've been able to find so far, are a bit disappointing, being of smaller scope in terms of both history and literary ambition. But all three of the Children of the North novels (and the massive novel that they collectively become) are strikingly dark, even cynical, as well as being vastly entertaining.
Posted by Glenn Harper at 3:25 PM