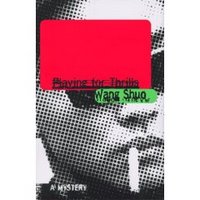 There are actually a few crime series set in China, but only one genuine Chinese noir (translated into English) that I know of. Two series set in China are Qiu Xiaolong's Death of a Red Heroine and its sequels and Lisa See's Flower Net and sequels. Both series have 3 volumes now, I believe, and both are by Chinese-Americans and were written in English. Of the 2, Xiaolong's is the more immersed in China and in a particular city, Shanhai. See's novels follow a Chinese detective whose lover is American, and who has spent time in the U.S. And Xiaolong's books are more strictly police procedurals, rather than thrillers, and as such a persistent theme is the interference of the political realm into the world of police, crime, and justice. Wang Shuo's Playing for Thrills, on the other hand, is genuine, full bore noir from a Chinese writer. A caution, though: It's literary noir, in the vein of Japan's Ryu Murakami or Kobo Abe, but with a much livelier style than Abe. Very dark, funny, breezy, but the crime aspect is only a device to get things moving. There's also a movie version of Playing for Thrills. In Southeast Asia, there are noir or noir-esque novels from Singapore (Gopal Baratham's Moonrise, Sunset, which is a gloomy portrait of the city-state but from an author who can't stay gloomy very long--so it's lighthearted in a funny way; and Hwee Hwee Tan's Foreign Bodies, which has an oddly religious theme that undercuts the noir aspect of the story of the sometimes draconian justice system in Singapore). There is a good bit of Korean noir on film, but the only fiction I know of is the series by Martin Limon, who exploits his knowledge of the U.S. presence in Korea in his novels about American M.P.s dealing with crimes in and around U.S. bases. Soho Press published the first couple of Limon's novels and are now publishing the Colin Cotterill novels about Cambodian crime, from the point of view of a pathologist. Personally, I have not found the Cotterill novels very interesting or entertaining, and Cotterill is attempting the very difficult task of writing as an outsider from an insider's point of view. John Burdett's novels about a Bangkok policeman who also runs a brothel (there are 3 of them now), though, make Cotterill's novels look better--Burdett strives to create a Buddhist pimp who works for a corrupt police department, but along the way he makes the exploitation of women in the Thai sex trade seem a trivial matter, the "girls" love what they do and make lots of money and that's the end of it. And the voice of Burdett's character/narrator is a stream of repetitious, self-justifying cliches about Buddhism, prostitution, and even murder. Plus the books are too long. Send me a note if you think I'm wrong about Burdett, who chose Bangkok as a good locale for a crime series, rather than writing from intimate experience of the place--a new kind of colonialism, perhaps. I don't know of any Vietnamese noir, though the country and its history, interlaced with U.S. history, would seem to make Vietnam a great place for noir fiction. There's always Graham Green's Quiet American, but that was a long time ago.
Posted by Glenn Harper at 11:00 AM

As you seem interested in Noir fiction from modern Asia, you might enjoy these Noir paintings from the center of Asian Noir, Bangkok.