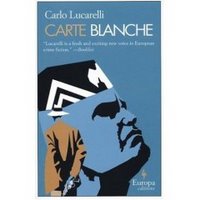 Carte Blanche is the first novel of a trilogy set in Northern Italy at the end of the Fascist era. Commisario De Luca, the hero of the trilogy, has recently transferred from the political police to the regular police, but politics continues to intrude on his investigation of the murder of a well-connected but shadowy Fascist, and De Luca becomes involved with a fortune-teller, the underworld, the falling government, and the pursuing partisans. There are echoes of The Conformist, but Lucarelli's sleep-deprived cop is more self aware than Moravia's Fascist agent, and the novel refers more to classic noir fiction than to Moravia. Plus De Luca is at the Northern periphery, not the Roman center, of Fascism, keeping things at street level rather than the marble halls and ballrooms (or mission to Paris) familiar from readers of Moravia's novel or viewers of the Bertolluci movie based on it--though the linkages among sex, drugs, and violence are prominent features of Lucarelli's novel as well as Moravia's. Carte Blanche is, in spite of its complicated plot, very short and moves very fast. Not having seen them, I'm guessing that the 2 sequels will round out the story, and that the trilogy is in effect a novel in three sections--but the vagaries of the publication of novels in translation don't allow us to see the whole story yet. What we do have in English now, thanks to Europa Editions, is a fascinating glimpse into one of Italy's most troubled eras, and into a character whose origins is suggested in Lucarelli's fascinating introduction. This novel is quite different from the Inspector Grazia Negro series by Lucarelli (two of which have been translated), which are serial killer thrillers set in Bologna (I've talked about them previously in this blog). A brief preview of an upcoming post: Rounding the Mark, the new Montalbano story by Andrea Camilleri, is out in English now, and a copy is waiting for me--so you'll see something about Sicilian noir soon.
Posted by Glenn Harper at 10:04 AM