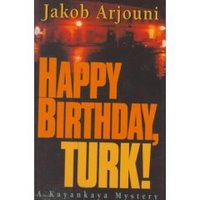 There have been a number of German crime novels translated recently (from Bitter Lemon Press and others), and I thought I'd go back to one of the first German noir novels to be translated, Jakob Arjouni's Happy Birthday, Turk! Arjouni's novel predates the marvelous Violetta, by Pieke Bierman (set in Berlin in the first days after the Wall came down). Philip Kerr's noir series set in Nazi Germany have been around a while, but Arjouni's Detective Kayankaya is definitely the senior noir detective of German crime fiction, at least as translated into English. And Kayankaya is definitely a noir anti-hero, of the classic variety. He's pretty good in a fight but is ultimately on the losing end of the violence around him. The clients for his private detective business are the outsiders, not the insiders, of the German miracle (in the case of this first novel they are Turkish immigrants, like Kayankaya himself (the detective is, like the author, a German citizen who speaks no Turkish). The plot wanders through the underground drug and sex trade of Frankfurt and winds its way back to the immigrant community: one of the strengths of this short novel is its unsentimental view of all segments of the German society in the '80s. It's a short book, but pared down to essentials rather than leaving anything out. The terseness suits the noir genre as well as the straight-ahead character of the first-person narrator-hero. At the end, Kayankaya is battered, has a clear moral view that is tangential to the legalities of the murder he's supposed to be investigating, and single-minded in maneuvering his enemies toward some kind of justice. Rereading Happy Birthday, Turk! was if anything more rewarding than reading it the first time, and I'm motivated to continue with the next 2 Kayankaya novels, the only ones translated, as far as I know. Arjouni has a couple of other books in translation, but one is short stories that are apparently fables of a sort and a novel of Berlin that includes crime and criminals but is really a "rootless youth" novel rather than noir.
Posted by Glenn Harper at 6:22 PM

I've just started a blog on international crime fiction called Detectives Beyond Borders http://detectivesbeyondborders.blogspot.com/ Naturally I found my way to your site pretty quickly. Arjouni is a pretty interesting guy. The one novel of his I've read contained a fair amount of what can be frustrating and disappointing about "international" crime fiction but also at least one thrilling, scintillating moment.

I more or less agree with the Arjouni comment in the Bloomsbury Good Reading Guide to Crime Fiction, which was that his protagonist's situation as a German of Turkish descent gives his stuff more bite than its otherwise somewhat conventional plots might give.

I'll look forward to some interesting discussions with you.

I bought and still Drink More! today. The opening chapter's device of summing up a series of events through newspaper headlines and articles is, like several other Arjouni devices we've discussed, familiar. But I think he does it well and with a more mordant and satirical political focus than other writers. This book could be good.

Detectives Beyond Borders
"Because Murder is More Fun Away From Home"
http://detectivesbeyondborders.blogspot.com/