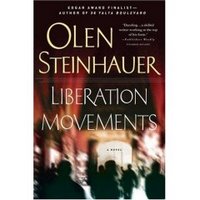 I'm looking for some opinions about Olen Steinhauer. I've been reading his recent Liberation Movements, and it fits into a nexus of other "international noir" books that I've read, in several ways. Like the works of Swedish author Håkan Nesser's Van Veeteren novels (such as Borkman's Point, reviewed here in 2006), Steinhauer's novels are set in a fictional country (in Nesser's case, it's a vaguely "north European" nation, somewhere between Holland and Sweden, in Steinhauer's, it's an East European nation under Communism). That fictional country thing had kept me from reading Steinhaier before--I prefer to get a glimpse of a real city, a real place, in reading crime fiction--that's one of the principles on which this blog is based, actually. Like the Berlin trilogy of Philip Kerr (there's a 4th novel now), Steinhauer is exploring life under a totalitarian regime under which he never lived. But for me, Steinhauer's unnamed country is not as believable as either of the above--and for me, his portrait of the "evil of Communism" has a kind of American triumphalism about it. In this latest novel, he doesn't just show the shoddiness of the classic Trabant automobile of the East, he feels he has to show a public plaza littered with them. In fact, in East Berlin, on the one occasion when I visited the Communist East, there were plenty of Trabants--all running, all parked in an orderly fashion in the public squares. There's plenty of misery and horror to portray under Communism without taking cheap shots at something you don't have personal knowledge of. In fact, Trabants are a sort of collector's item in the East now--Communist nostalgia, I guess. I'd like to hear your opinions about Steinhauer's fictional country in these novels. The books are well enough written--constructed fairly tightly--except that he feels it necessary to use an X-files plot element, extra-sensory perception (in particular, precognition), to work out the kinks in his plot. It also seems to me that his characters are not so fully drawn as Kerr's (I have the same complaint with Nesser, but Nesser's characters are at least not Communist stock characters, which some of Steinhauer's are). Steinhauer's novels are, I guess, more thrillers than noir--is it too much, then, for me to expect the fatalism (embodied, one hopes, in well realized characters and plots) that is a hallmark of noir? In any case, instead of that kind of fatalist, dark tale, Liberation Movements seems to be a brittle tale of evildoers and unfortunates--a melodrama, in other words.
Posted by Glenn Harper at 1:13 PM

I recently read "The Confession". I find the fictional setting somewhat frustrating, and seemed to spend most of the novel trying to guess which country it was based on, and settled on Bulgaria. One advantage to the fictional setting though is avoiding the difficulties of imputing dialogue/motives to known historical figures to fit in with the story. I think it's quite a brave move using a fictional country setting, as the author loses the easy option to evoke settings easily.

Using clues in the story, I decided the country lay between Hungary and Romania. I didn't realize it was meant to be fictional and this did frustrate me. There wasn't any precognition or other extrasensory perception in the book I read, "The Confession."